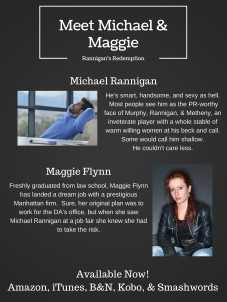 Rannigan’s Redemption Part 1: Resisting Risk is coming out on Tuesday, December 8 and will be available at Amazon, iTunes, B&N, Kobo, and Smashwords.

The story is a smart, sexy romance about handsome, roguish attorney Michael Rannigan and Maggie Flynn, the smart, spunky redheaded law school grad he hires to work at his firm.