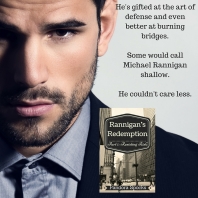 This is probably a bad idea. Maggie stood on the terrace of Michael’s apartment looking out over the city. It looked magical after dark, all dotted with twinkling lights. Even the traffic sounds were muted from this height. Lost in thought as she was, Michael’s voice startled her.
“That’s better. Can I get you something?”
She turned to see that he’d exchanged his suit for jeans and a faded forest green t-shirt. His feet were bare. “Come on in, I’ll pour you something.”
Wordlessly, she followed him back inside the apartment. Baseball was playing on the huge flat-screen television; the sound was low. Michael turned to her. “Relax,” he said, eyes sparkling with amusement. “We’re not at work anymore.”
He continued on to the bar. Maggie stopped by the kitchen counter where she’d dropped her purse, stepping out of her black pumps and removing the jacket of her black skirt suit, folding it carefully and laying it over the back of the couch.
She felt vaguely uncomfortable and rubbed her arms, now bare in her sleeveless grey chiffon blouse, as she crossed the room to the bar. Michael was behind the sleek black counter, his back turned, so she sat on one of the ultra-modern black bar stools, tucking her feet carefully onto the footrest as she noticed the mirrored front of the bar. He was reaching into the glass-fronted oak cabinet that complimented the apartment’s light hardwood floor. From this vantage point she could appreciate the way his shirt hugged his torso, the contours of his shoulders and back evident as he moved.
Focus, Maggie. She cleared her throat. “This really is a beautiful apartment.”
He glanced over his shoulder. “But not your style,” he quipped, grinning.
Maggie blushed. “I like more classical design, of course, but this is very nice,” she said, fidgeting with her bracelet.
Michael turned around and placed two heavy glass tumblers on the counter. Beside the glasses he placed a bottle of Pappy Van Winkle’s Family Reserve bourbon. Maggie frowned slightly and looked up at him. “This isn’t the same bottle I gave you a few years ago, is it?”
He grinned. “Yes, it is.”
She shook her head. “But how…? I mean, why didn’t you drink it?” Her face fell. “You didn’t like it.”
“Are you kidding? I love this. I only bring it out for special occasions, for people I know will appreciate it.” He poured for them both. “Every year you get me great bourbon, but the year you gave me this?” He lifted the bottle admiringly. “You knocked it out of the park.” He replaced the bottle and walked around the bar to where she sat. On the bar stool she was as tall as Michael.
Maggie snickered. “Baseball reference.”
Michael laughed and lifted his glass. “To baseball, especially my Yankees, may they win the pennant!” Maggie laughed and touched her glass to his.
“And, to friends,” he added, regarding her warmly.
Maggie sipped quietly, blushing again. She set down her glass and turned to look out the huge wall of windows, fidgeting absently with her bracelet again.
Michael nodded at her wrist. “Is that the one I gave you?” he asked.
She looked down, surprised. “It is. I forgot that I had it on. I wear it a lot, actually, but most of the time it’s hidden beneath my sleeves.” She held it out for him to see. “I love it. It’s the most beautiful thing I’ve ever owned,” she said earnestly.
Michael took her hand and looked closely at the bracelet, fingering the moonstones and turning it around her wrist. “You should have beautiful things,” he murmured. He lifted her hand and turned it over, gently pressing her palm to his lips.
Maggie felt her heart pound. She’d had a lot of bourbon. That could explain the rush of heat she felt. It could. She slowly moved her hand to cup his jaw, feeling the prickle of his ever-present five o’clock shadow. His soulful brown eyes drew her like a magnet, as though some invisible force pulled her to him, or him to her, it was hard to tell.
“Aw, Mags,” he breathed, just before their lips met. Like the handful of other times they’d kissed, the heat was instant, the hunger and desperation, tongues seeking and finding. When he pulled back she was breathless.
“I should probably go,” she whispered. She slid off the stool and unsteadily stepped away from the bar. Michael shoved his hands in his pockets and followed her to the kitchen counter where she’d left her things. Maggie stopped at the counter, her back to him, and she closed her eyes.
“I wish…” he began, and stopped.
Maggie licked her lips, eyes still closed. “What do you wish?” Her voice was husky.
Michael lightly caressed her upper arms with his finger tips and nuzzled the back of her neck through her long red hair. “I wish you didn’t have to go.”