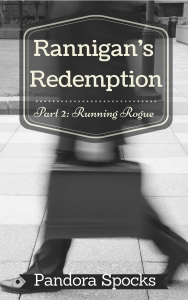 The second installment of the Rannigan’s Redemption series, Running Rogue, will be releasing on February 9.

Michael Rannigan is running rogue. Since Maggie’s abrupt departure from the law firm of Murphy, Rannigan, & Metheny, he’s been in a tailspin. As he limps along in the new normal, he misses her more than he ever imagined.
Maggie misses Michael as well. But she makes the best of her new job at the District Attorney’s office. Occasionally they cross paths in court, each assessing the other. Like Michael, she finds herself making questionable personal choices.
When opportunity knocks for Michael he leaps at it, maybe as much to avoid Maggie’s absence as anything else. The fact that his decision impacts everyone else at the firm doesn’t slow him down at all.
Then comes news that shakes him to his core. Now that he’s burned all his bridges, who will be there to help him pick up the pieces?

Stay tuned.  I’ll be releasing excerpts as we get closer to the launch day.

Rannigan’s Redempton Part 2: Running Rogue comes out February 9, and is available NOW for pre-order at these outlets.