Did I tell you I love a good Maggie Carpenter story? Take a peek at what she has coming out soon.

I am on the final edit of this very steamy book about a hot young actor and a feisty female studio executive. Though it is not an age-play novel per se, it does offer a scene or two in which our heroine (currently named Chelsea)  learns how freeing it is to be a little girl again.

This snippet takes place soon after the two have met, and Braxton (our hero) takes a wander through his dungeon.

(This is not the cover. I just love the picture.) 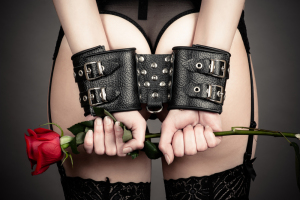 His row of floggers and crops beckoned, and meandering around the exotic furniture he reached the row of hooks that held them in a line across the wall, picking up the first one he’d ever owned. It was still his favorite. He’d even named it Freddy the Flogger as he’d swished it across Rebecca’s gorgeous ass. It was heavy, with thick…