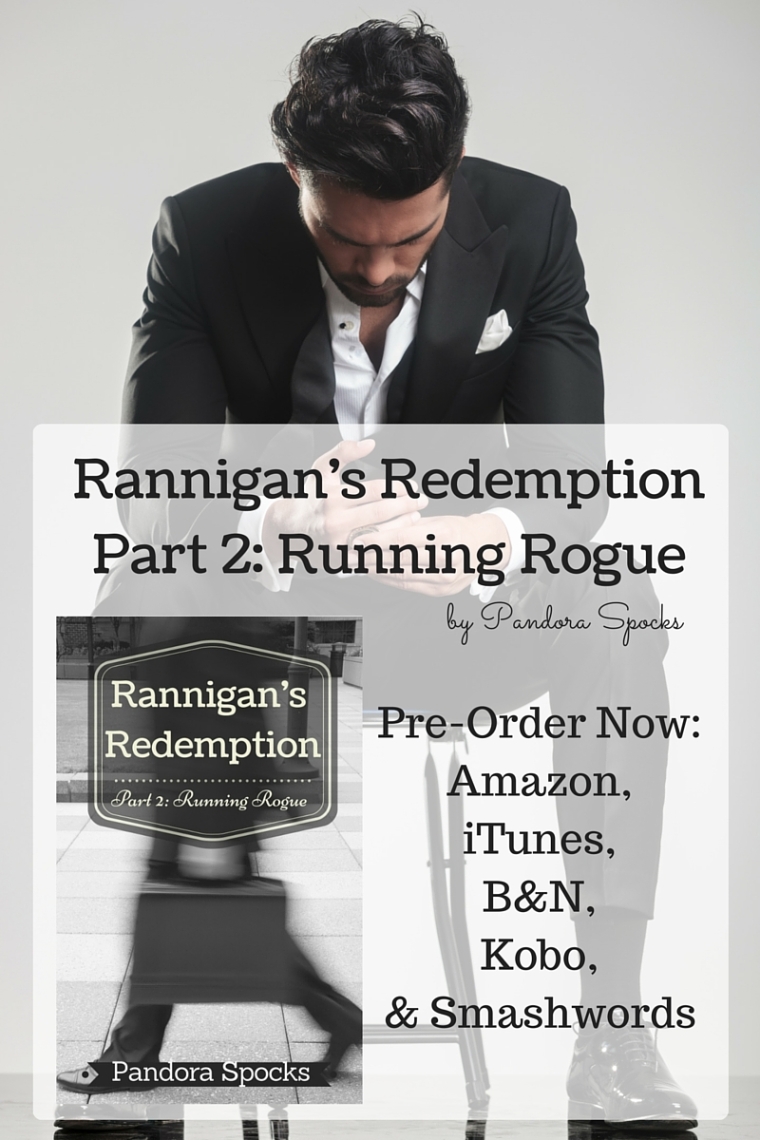 We’re exactly a month out from the release of the second part of the Rannigan’s Redemption series, Running Rogue.  In honor of the occasion and sexy Saturday, here’s the first (explicit) excerpt.

The following day, Michael left his sanctuary to relax on the beach. He chose a chaise far down the beach and away from the other sunbathers. Thoughts of Maggie still swirled through his mind like dry leaves in a brisk fall breeze.
I can just go about my business like nothing out of the ordinary happened. I’m sure she’s not spending time obsessing over it.  He shook his head. That wasn’t true. He knew Maggie well enough to know that she was bound to be thinking it over, considering how best to handle the situation. Besides, she’d been upset when she left, thanks to Gwen. She’d been in such a hurry, she’d forgotten her bracelet on the bathroom counter.
After Maggie left, he’d asked Gwen to leave and eventually had to threaten to call security before she would go. She’d had some choice words for him, too.

It was stupid to call Gwen anyway. I’d gone through all my usual dates and couldn’t find anyone. Better no date than Gwen.  He’d tried to call Maggie both that night and the next day but she wasn’t picking up. He’d left messages on her voicemail and he’d texted, too.

No, she’s still upset. First thing is, I have to straighten things out with her. He was surprised to find that he cared about how Maggie felt. It occurred to him that she was really the closest thing he had to a friend. He shook his head.

After we get the whole Gwen thing sorted out, maybe Maggie will agree to go out sometimes. Michael pondered that idea for a moment. There were events that she really was suited for, case in point that music charity thing they’d attended years ago.

And the sex… His mind drifted back to the way she’d unrolled the condom using only her mouth, and his cock immediately responded. He nodded slowly. Going out with Maggie now and again would be a great thing.

Realization interrupted his reverie. No way would Maggie agree to be just another girl in my ‘line-up.’ Michael sighed.  A new idea occurred to him. Suppose I date Maggie exclusively? He scratched his chin as he tried it on for size. Maggie and I…a couple. He considered the implications. We’d go out together after the weekly gathering at Doc’s, for example. Maybe sometimes we’d stay in, cook together.

He smiled picturing the two of them in his kitchen whipping up something delicious, laughing and joking together. His imagination shifted to her naked form, her ample tits, that irresistible tattoo on her hip. Sex with Maggie on a regular basis…

This is doable. Michael nodded slowly. I could be monogamous. We could see where this thing leads. Maybe she could even move in.   He frowned. She hates my apartment, though. He shrugged. We could find something together. But I’m getting ahead of myself. One thing at a time.

Michael smiled to himself, pleased with his decision. For the first time since he’d arrived in the Maldives he felt himself relax. He gazed out across the tropical blue water and breathed out a relieved sigh.

A bit further down the beach he noticed the male half of the honeymoon couple Vivian had pointed out in the restaurant. The husband in his blue trunks was very pale. Michael wondered briefly if he was using the proper amount of SPF, then immediately scowled at the idiotic thought.

Michael watched him gesture toward the water and followed the man’s gaze up the beach. “Holy shit,” Michael breathed to himself. The man’s wife, topless and wearing a tiny white thong, joined him by the edge of the water. Even from this distance, Michael could see that the woman’s body was slamming.

The pair began walking down the beach toward where Michael was sitting. Once again, he was glad to have his mirrored shades. He pointed his face straight ahead and watched them out of the corner of his eye. As they got closer, he saw that her tits were huge, probably 38DD or bigger, with pert pink nipples that made his tongue tingle in anticipation.

To his surprise, the woman spoke to him. “Hello,” she said. “We saw you in the restaurant the other night. I’m Amanda and this is Kenneth.”

Michael greeted them both and gave his patent Michael Rannigan smile. “I’m Michael.”

“Maybe you and your wife could have dinner with us tonight,” Amanda offered.

Michael laughed ruefully. “Actually, she’s not my wife. And actually, she had to go home. I’ll probably dine in tonight. But thanks for the offer.” He watched her carefully. She had that look in her eyes. Like the one Maggie had, the one that said she found him attractive. He felt a bit sorry for poor Kenneth.

“Oh, well,” she said, “I’m sorry your friend left. Are you sure you won’t join us? Wouldn’t it be great for Michael to join us for dinner?” she said to Kenneth, who nodded.

He smiled. “Thanks for your kind offer. I have some work to do anyway,” he lied.

Michael did end up having dinner on the deck of the bungalow. He didn’t miss Vivian’s incessant chatter at all. The sound of the water was a perfect accompaniment for his meal. Later, though, he headed over to the tiki bar on the beach for a cocktail. Standing at the bar, he’d just ordered a bourbon when he heard someone call his name.

Turning, he saw Amanda walking toward him, dressed this time, in a hot pink halter-topped sundress. Her long blonde hair swirled around her tanned shoulders. “There you are,” she said.

He gave an exaggerated frown. “Was I missing?” he quipped.
Amanda laughed. “I was just saying to Kenneth that I hoped you’d come out and play.” She placed a well-manicured hand on his arm.

In her light blue eyes Michael saw the double entendre. He looked around. “Where is Kenneth, anyway?”

Amanda smiled slowly. “Kenneth went back to the bungalow. He got a nasty sunburn today.”

Michael grimaced. “That’s a shame. I hope that doesn’t ruin your trip.”

“I’m determined to keep a stiff…upper lip,” she smiled. “What are you drinking?”

Michael hesitated. He’d finally come to a decision about Maggie. And Amanda was on her honeymoon, for fuck’s sake. Ultimately, he shrugged. “Bourbon. Would you like one?”

Two bourbons later, he followed Amanda into the ladies room. Locking the stall door, he untied her halter to release the amazing tits he’s enjoyed on the beach, groping them, pulling the nipples and stretching them to attention as he kissed her roughly. Then he pressed her up against the stall door and lifted her skirt to discover she wasn’t wearing panties. Her pussy was pink and smooth, and it was nicely wet.

“I want you to fuck me,” she hissed in his ear. Michael wasted no time in unzipping his pants and plunging his hard cock into her greedy core. She gripped the back of his neck with both hands as he pounded into her against the bathroom stall.

“Oh, Jesus, yesssss!” she cried out. Michael gave two more thrusts and exploded in release. He waited a beat then pulled out, cleaned himself off a bit, then put his pants back together. He left the restroom without a word.

Back in his bungalow, Michael went into the bathroom to start the shower. He caught his reflection in the mirror.

I’m a shit. I just fucked a bride on her honeymoon. There’s no way I could be faithful to Maggie or anyone else. She deserves better than that. Michael turned away from the mirror and restlessly ran his fingers through his hair in disgust.

Rannigan’s Redemption Part 2: Running Rogue comes out February 9, and is available for pre-order NOW at these retailers.