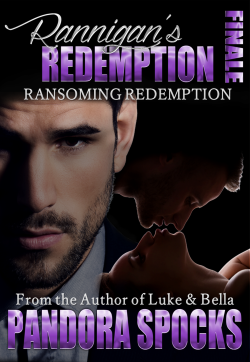 Ransoming Redemption, the final chapter in the Rannigan’s Redemption series, launches in just over two weeks on April 18.  It’s the conclusion of the story of the complicated relationship between Manhattan-based attorneys Michael Rannigan and Maggie Flynn.

Michael Rannigan sees the writing on the wall.  And he’s determined to find redemption.  He knows he’s spent his life keeping everyone at arm’s length.  He’s burned bridges and destroyed friendships, leaving a path of destruction in his wake.  But he thinks he’s found a way to make things right.  At least for the one person who’s never given up on him.

The other man nodded, jotting quickly in his small notebook.  “You never know what might come in useful.”

“I don’t have a clue about the mother’s name.  Obviously I can’t ask Maggie.”

“That won’t be hard.  Do you have any idea about what the mother did for a living?”  Michael shook his head.  “Well, don’t worry about it.  I’ve done cases where I had less to go on than this,” he said confidently.

“I appreciate this, Sam,” Michael said, standing to shake the man’s hand.

“No problem, Mike.”  Sam’s brow wrinkled slightly as he regarded Michael for a long moment.  “I suppose it’s none of my business, but how are you doing?”

Michael smiled tightly.  “I’m hanging in there.”  The other man recognized the tone and knew not to push the issue further.

Both men heard a key in the lock and they turned in the direction of the front door.  “Hey, Michael, it’s me.”  Maggie walked into the living room, digging into her purse as she did.  “I forgot to check your mail, I can get it…”  She stopped mid-sentence as she looked up at Sam.  “Oh, I’m so sorry, I didn’t realize…”  Her face broke into a smile.  “Sam Mainor, holy shit, it’s been a while!  How are you?”

“Well, I’m…” she frowned and looked from Sam to Michael.  “I’m great.  Michael, are you working?”

Maggie watched as Michael closed the door behind Sam.  The slight frown was back.  “What was that about?”

Michael shrugged.  “I told you.  He just stopped by to say hello, see how I’m doing.”  She crossed her arms and gave him a skeptical look, clearly not buying his story, so he changed tactics.  “How was your time with Beau?”

She whirled around and headed into the kitchen.  “Great!  We had a nice time,” she called over her shoulder.  “Have you ever been to Holly Springs?”  Michael followed her into the kitchen and leaned casually against the counter, watching her as she focused intently on searching through the fridge.  “Did you eat the chicken I left you?”  She turned to look at him.

Michael smirked at her.  “How was last night?”  He delighted as she blushed profusely.  “Somebody got laid,” he sang lightly.

“Dammit, Michael, do you always have to be so fucking infuriating?”

“I just do it to watch you blush,” he chuckled and she softened a bit.  “Seriously, you had a good time?”

Maggie looked up at him.  “Yeah,” she smiled.  “We had a very nice time.  He’s a really great guy.  Do you know, yesterday morning he did a ‘Make-a-Wish’ thing?”

Michael nodded.  “They ran the story before the game last night.”

“So where is lover boy now anyway?”

Maggie shook her head and her eyes blazed.  “Don’t you even start that bullshit!  Or I’ll be out of here so fast it’ll make your head spin and you’ll never see me again.”  Her tone was low and menacing.

“He’s on his way to work.  I’m going to get a list of what you need and I’ll stop by after work tomorrow.  Are you ready for round two of chemo?”

His shoulders slumped as reality made its reappearance.  “I’m as ready as I’ll ever be.”  He turned and made his way back to the living room, sinking onto the couch and propping his feet on the coffee table.

Ransoming Redemption is out April 18, and it’s available now for pre-order at these fine online booksellers.

Not all caught up on Rannigan’s Redemption?  No problem.  Resisting Risk and Running Rogue are available now at those same retailers.