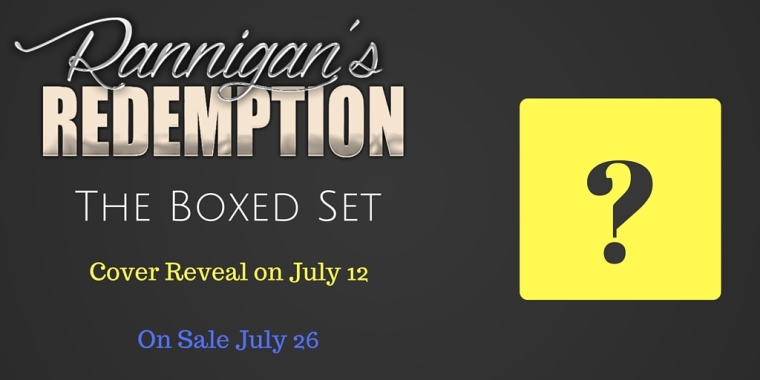 Not so long ago I wrote a three-novel story called Rannigan’s Redemption.  The books were released one at a time over the course of about six months.

On July 26, you’ll be able to own the entire collection as a boxed set.  And on July 12, I’ll be revealing the cover.  You’ll see it first here.

For now, here’s an excerpt from Running Rogue, the second book.

Maggie strode purposefully across the lobby of Michael’s building.  It had been a shit week and knowing that she had to work all weekend to make up for what she’d missed, all she wanted to do was to check in on Michael, deliver his soup, and head home to a nice hot bath and a large glass of wine.  Ahead of her a man was just stepping into the elevator and she increased her pace, hoping to make it before the doors closed.  He turned and their eyes met just as the doors slid shut.

“Well, shit!” she muttered, juggling her purse, her brief case, and the bag from the deli.  Just then the doors slid back open.

“Sorry about that,” the man said, “I didn’t realize you were right behind me.”  He held open the door as she stepped in and turned around.  “What floor?”

Maggie glanced up at him.  He was tall with broad shoulders, muscular without being muscle-bound, with wavy brown hair and sparkling blue eyes framed by the longest lashes she’d ever seen on a man.  She’d noticed a bit of a drawl when he spoke.  Dressed in a t-shirt and sweatpants, he’d apparently been working out in the gym.  He stood beaming at her with a boyish grin on his face and he seemed to be waiting for her.  She realized she was staring.

Bobby’s eyes widened and he took a step back.  “Oh.  You’re one of Michael’s girls.”

Maggie frowned.  “No.  I am absolutely not one of Michael’s girls.  Nope.  Not me.  No way.”  She shook her head emphatically.

Bobby grinned wryly.  “So you’re not one of Michael’s girls.”

She felt her face flush.  “I’ve known Michael for a long time.  We used to work together.  He’s a little…under the weather, and I told him I’d stop by, bring him some soup.”  She held up the deli bag for emphasis.

He flashed the boyish grin, blue eyes sparkling with amusement.  Maggie felt her pulse race and a warm flush crept up her neck.  What the hell?

“Everybody hates lawyers,” she replied as the elevator doors opened on the twenty-first floor.  She stepped out into the hallway and immediately went down hard on her left knee.

“Motherfucker!” she cried out.

Bobby was beside her instantly.  “Are you alright?  What happened?”

Maggie looked around.  “My shoe.”  The heel of her right shoe was caught in the space between the elevator and the hallway.  It had snapped off as she stepped forward.  Bobby grabbed it before the doors closed, then gently took her arm and helped her up.

“Did you hurt yourself?” he asked, concerned.

“I’m alright, really,” she replied shakily.  Blood was dripping from her knee and running in rivulets all the way down her shin.

“You banged up your knee.”

“But I saved the soup, so there’s that,” she quipped.

He placed a hand on the small of her back and walked her down the hall, stopping at a door.  “This is me,” he said.  “Come in and let me at least bandage you up.”  Maggie regarded him warily.

“I’m not an axe murderer, I promise,” he laughed.

She frowned.  “Isn’t that exactly what an axe murderer would say?” she said as he unlocked the door.

“Tell you what–we’ll leave the door open.  You can sit right here.”  He pointed to a bench in the foyer.  “If I make any sudden moves you can run for it,” he chuckled.

Sheepishly, Maggie sank onto the bench.  Truthfully, her knee hurt.  She set down her things and glanced up at him.  “Thanks,” she said quietly.

Bobby smiled and gestured to his right.  “I’ll just…go get my axe.”

She could hear him in another room rummaging around through something.  She removed her broken shoe and held up the dismembered heel.  It had come clean off the sole.  An image flashed through her mind of the shoe repair shop just around the corner from her apartment.

“I can fix that for you.”  Startled, she looked up.  Bobby had returned with first aid supplies.

He poured alcohol on some gauze and knelt beside her.  “It won’t take me two seconds,” he murmured, dabbing at her knee.

Bobby looked up at her.  “Sorry, cher,” he said, “we’ve got to get it cleaned out.”  Gently he grasped the back of her calf and raised her leg, wiping away the streaks of blood.

Maggie stared at him, scarcely breathing.  There was something electric about his touch, so strong yet so tender.

He finished cleaning her shin and returned to her knee, carefully placing a large bandage over the scrape.  “There you are, good as new.  Well, almost,” he smiled.

He took the shoe and heel from her.  “I really can fix this for you.  I’d just have to find my tools,” he nodded his head toward the other room.  “I should really unpack anyway,” he smiled ruefully.

Maggie rose from the bench and stood lopsided on one heel.  “I don’t want to be more trouble than I’ve already been.”

Something tells me that you’re all kinds of trouble, cher.  “It’s no trouble.  Besides, I’d be worried about you limping along like Quasimodo on your way home,” he laughed.

She laughed, too.  “Well, alright then.  Thank you.  And thanks for…”  She glanced down at her knee.

Maggie felt as though suddenly all the air had gone out of the room.  She stared up into his amazing blue eyes.  She opened her mouth but no words came out.

He spoke.  “Just stop by when you’re finished at Michael’s.  If I have to leave before that, I’ll bring you your shoe.”

Be sure to check back here on Tuesday for the cover reveal of the new Rannigan’s Redemption Collection Boxed Set!  In the meantime, ‘LIKE‘ me on Facebook–I’m there every day!