Being an Indie author is rewarding in a lot of ways.  I love having the freedom to write my stories my way, to release them when I’m ready, to place them in markets of my own choosing.

But as an Indie author, the element of time can be frustrating as the demands of the day job encroach on my thoughts and my writing time.  As a result, it sometimes takes much longer to complete a book than I would like.  I’m finding that to be the case right now.

Lost & Found, my current Work In Progress, is about spoiled Hollywood starlet Shasta Pyke, who is sent to the wilderness of northern Ontario to cool her heels for a few weeks following a scandal involving her married ex-boyfriend.  There, she meets hunky Dominant mountain man Blake Walker, a bush pilot and former wilderness counselor who’s helping run the family business.  Their attraction is instant, but they each have their own reservations. 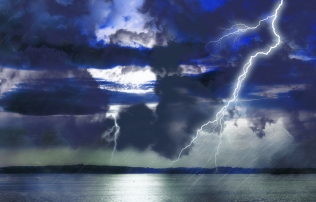 When the power went out, Blake wasn’t surprised in the least.  If anything, he was surprised it had lasted as long as it had.  This was undoubtedly the worst storm so far this exceptionally dry summer.  Angry lightning streaked across the dark sky, with thunder booming almost instantaneously.  For microseconds, the flashes illuminated the entire lake like mid-day.

He slid open the sheer drapes that shrouded the sliding glass doors overlooking the lake and settled in, book in one hand, a second bottle of Lebatt Blue in the other.  Leaning back, he rested his feet on the battered leather ottoman, content for the moment to watch the storm’s fury.

He wondered how Shasta was faring.  As he watched, another jagged bolt etched a path across the sky.  He chuckled lightly, picturing her, eyes wide, with the covers pulled up over her head.  I should check on her first thing in the morning.

She stood in front of him, eyes wide with terror and she was soaked to the skin, not having bothered with a rain coat.  He shouted above the storm.  “God dammit, Shasta, what the hell were you thinking?”

He snorted.  “What you did was a very ‘Shasta’ thing to do.  That’s the least of your worries right now.  Hold this.”  He moved her hand to hold the gauze and he reached around to turn on faucet in the bathtub.

She sat shivering, watching the tub fill with hot water.  Clouds of steam filled the room.  He left for a moment, returning with a flannel shirt of dark blue plaid, which he hung on a hook on the back of the door.  Next he turned off the water.

Naked, she stood trembling as he devoured her with his eyes, starting with her perfect round tits and their tight pink points, her narrow waist and the flair of her hips, the bare cleft at the junction where her legs met.  After all, she’d been on display on the dock the other day, surely she wasn’t shy now.  He knew he was being an ass and he didn’t care.  Anger still thrummed through his veins.

While it’s far from finished, I’m aiming for a December release.  While you wait, the complete Rannigan’s Redemption is currently available in all the usual outlets.

This universal link will take you wherever you usually buy your ebooks: books2read.com/RannigansRedemption