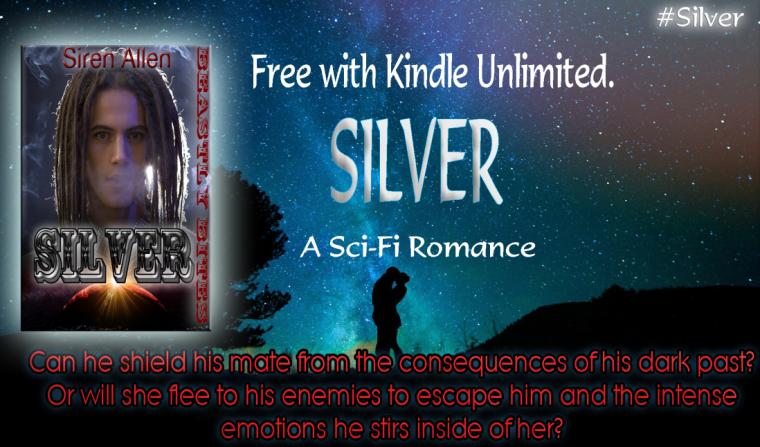 This edition of Watch This Space spotlights sexy author Siren Allen and her new smoking hot sci-fi romance, Silver. Wondering what it’s about?  Here’s the blurb:

All Malia Valdese wants to do is survive in the Outlands and serve food to the patrons of her diner. She doesn’t want anything to do with the handsome silver-eyed stranger who keeps showing up after closing, asking her weird questions and making her feel something she hasn’t felt in years, desire.

She doesn’t care that he’s the sexiest male she’s ever seen or that he stares at her like she’s the main course. Steering clear of him is her plan. Well, it was the plan, before he turned her world upside down with four words…. You’re coming with me. Apparently she has no say in the matter.

She’s not on the menu. But she’s what he hungers for.

Her scent tells him she’s his and the wanted pictures popping up all over the dark-net tells him he needs to lay low for a while. Having her next to him in bed while he tries to clear his name is the plan. Unfortunately, his enemies are closer than he thought and now they’ve found his weakness…. her. Can he shield his mate from the consequences of his dark past? Or will she flee to his enemies to escape him and the intense emotions he stirs inside of her?

No matter what she chooses, he has no intention of letting her go, ever.

I love a good, spicy sci-fi romance and can’t wait to read this one.  Check out this excerpt:

Why would she do that? No rational female would tell a creature like him to step away. Wait, she should do that. She wasn’t trying to be with him for real. This was pretend.

She couldn’t say it. The words wouldn’t come. Instead, she reached up and touched his face. His eyes closed and he leaned his forehead against hers.

“I don’t want to say that.” Even the rational part of her was falling for this male.

“Good, because I don’t want you to say it. I want to keep you all to myself,” he whispered. “I don’t want to share you.”

“You don’t have to share me. I’m all yours.” Yep, she’d just said that. And right now, she meant it. She’d deal with the consequences of her words later.

“All mine,” he mumbled, opening his eyes. “And I’ll destroy anyone who threatens you.”

Stars, that was the most violent statement she’d ever heard, yet it made her feel safe. What was she turning into?

“Say you believe me, Malia.”

“I won’t let anything happen to you. Say you believe this.”

“Good.” He took a step back, her hand still resting on his cheek. His hand covered hers. “I will go and get the crew. I will try my best not to kill any of them for getting too close to you.”

“Please behave. I don’t need you dirtying up my new kitchen.”

He smiled, before pulling her hand away from his face and placing it over his heart. Her breath caught.

“This is all yours,” he told her. “I promise.” He released her hand and went in search of his crew, leaving her breathless.

Stars, what had she gotten herself into?

And how the hell was she supposed to get out of it with her heart intact?

I’m such a huge fan of Siren Allen.  One thing that she does that I love is character interviews.  Get to know Silver and Malia, the stars of Silver.

Q: What thoughts raced through your mind the moment you found your mate?

Silver: My first thought was, ‘Stars, she more beautiful than I’d imagined.’ My second thought was, ‘I wonder what she tastes like.’

Malia: Oh my gosh, Silver, you didn’t have to give a second thought. My first thought was, ‘This guy looks like trouble.’ And I was right.

Q: If you could change one thing about your mate, what would it be?

Silver: I would change how she sees herself. She thinks she’s too curvy. I think she’s perfect. If I could change anything, I would make her able to see herself through my eyes.

Malia: Ahhh, that’s so sweet. If I could change anything about Silver, it would be his need to kill any male who stares at me.

Silver: That will never change.

Malia: I know. I’m just saying what I would change if I could.

Q: Do you believe in love at first sight?

Silver: Yes. Though, I knew I would love her before I met her. She’s my mate. I’m supposed to love and cherish her. But when I saw her for the first time, those feelings that were ingrained in me tripled. I knew I had to have her. Unfortunately, my way of getting her wasn’t the most charming.

Malia: That’s an understatement. As for me, I believe in lust at first sight. When I first saw Silver I didn’t think about forever with him. I thought of all the things I would love to do to him that night. The forever feelings came later, wayyyy later.

Silver: She played hard to get.

Malia: Uh no, I was hard to get. And then you kidnapped me.

So where can you get your Kindle on this book?  I have the links right here:

Now Siren Allen tells us a little about herself:

Hi, my name is Siren Allen. I’m a writer and lover of all things supernatural and romantic. I reside in southern Mississippi where I write steamy romances that are guaranteed to make you blush. When I’m not listening to the characters in my head and jotting down their adventures, I am busy working as a Clinical Laboratory Technician.

I love to travel, preferably with my husband, so he can do all of the driving. I enjoy time with my family, who are just as silly as I am. My hobbies are reading, writing and shopping, though I hate trying on clothing. If I wasn’t a writer or a Laboratory Professional, I would probably be a Secret Agent. But that’s the beauty of being a writer; you can create your own world and be whoever you want to be. In my imaginary world, I am Queen and my siblings are my minions.

Siren’s Newsletter: Join to stay updated on my new releases and giveaways:

Siren’s World: Join my Facebook group to chat with me about reading, writing and whatever else comes to mind: https://www.facebook.com/groups/1787481798155719/?ref=bookmarks

PLUS, and I know you’ll want in on this, Siren has a giveaway.  Don’t miss out!

Siren’s Sci-Fi Giveaway: Be sure to enter the rafflecopter giveaway for a chance to win a gorgeous Sci-Fi necklace.