In FOR SPARROW, Jessi Crenshaw, at forty-five, is a shell-shocked young widow.  Although her husband of twenty-five years had survived a health scare in the past, she couldn’t have imagined that he’d be gone so suddenly.  Having lived the last several years as Graham’s submissive, she’s lost not only her husband, partner, lover, and friend, she’s lost her Master.

Could it be that Graham’s intentions went beyond a temporary solution?

Here’s a brand new excerpt from For Sparrow.

Jessi held herself together while the kids were home.  No sense having them worry about her.  They needed to get back to their lives.  She certainly didn’t want them feeling as though they needed to babysit her.

Adam left for Orlando on Friday morning.  By the time Jessi dropped off Cara at Palm Beach International on Friday afternoon, she was exhausted.  She hadn’t been able to keep food down since she’d gotten the news about Graham.  She also hadn’t been able to sleep.  Now, with the house to herself, she finally let herself fall apart.

In the hamper in the master bath she found an undershirt of Graham’s.  It smelled of his cologne and dirty clothes.  She undressed, shrugged into the ‘wife-beater’ tank top, and crawled into bed.  There, she cried for hours, screamed for a while until her voice was gone, and ranted at the universe for letting her down.  When the tears dried up, she curled into a ball and found herself in a sort of twilight not unlike subspace, but rather than feeling safe she simply felt empty.

Eventually, disoriented and having no idea of the time, Jessi headed downstairs to the kitchen.  The clock on the microwave blinked 2:34.

Must be a.m.  It’s dark outside, she thought vaguely.

Checking the fridge, she saw that it was still half full of casseroles she couldn’t bear to uncover, let alone try to eat, so she closed the door and headed to the liquor cabinet in the dining room, choosing the first bottle her hand touched.  It happened to be a half-empty bottle of Jack Daniels.  Uncapping the whiskey, she took a long pull and coughed as the warm liquid hit her raw throat.

Unable to bear the emptiness of her bedroom, she took the whiskey with her and let herself out the back door, choosing a lounge chair by the pool where she proceeded to drain the rest of bottle before passing out.

Slowly, Jessi became aware of the noise of some sort of lawn equipment.

Damn neighbors.  She tentatively cracked open one eye and wondered at the gecko staring back at her.

Holy shit, I slept outside.  She carefully peeled her cheek from the seat cushion and pushed herself to a sitting position on the lounge chair, immediately regretting the sudden movement.

“Oh, my God,” she groaned, reaching to hold her head.  Still, the relentless sound of trimmers echoed in her ears.  From her position at the edge of the pool deck she could see past the end of the house, and to her surprise, a stranger was in her yard. 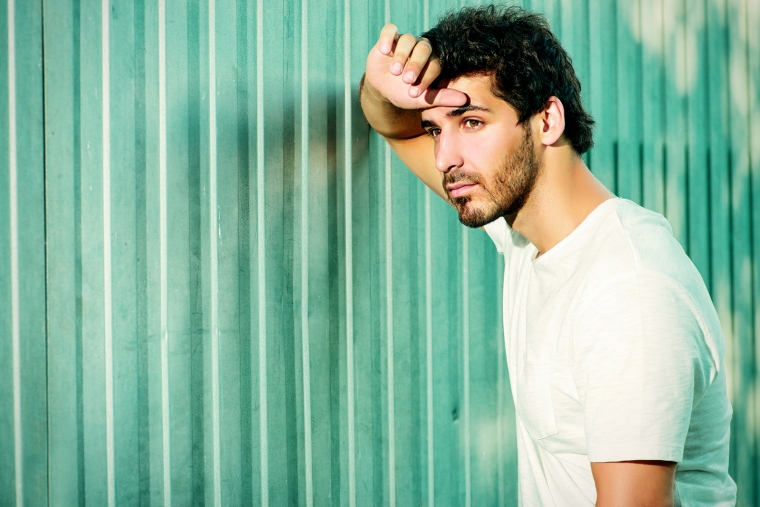 Ignoring the pounding in her head, she stood and walked toward the source of the sound.  A tall muscular man with dark brown hair was trimming her hedges.  He was dressed in a white t-shirt, khaki cargo shorts, and worn brown leather work boots.

“Excuse me!” Jessi shouted, the effort sending pain shooting through her head.  The man didn’t respond.

Moving closer she tried again, holding her head with both hands to prevent it from blowing apart.  “I said, excuse me!”

Startled, he jumped and turned off the offending machine, his brown eyes made larger by surprise.  “I’m sorry, did I wake you?” he asked.

“What are you doing here?” Jessi asked.

Jessi frowned.  “Yeah, I can see that.  I mean, why are you on my property, trimming my hedges?”

The man frowned as well.  “Um, I mentioned to you that I’d be here today to help out with your lawn.”

“Who are you?  When did we decide that you’d come here to do my hedges?”

He smiled in a friendly way.  “I’m Judd.  Farris.  We spoke at the funeral?  I said that I’d be over today to help out.”

Jessi blinked at him, trying desperately to recall ever having had a conversation with this…Judd person.

“Out by your pool?  I know, there were a lot of people here.  It probably all runs together.”

You have no idea, she thought.  “Oh, you were friends with Graham?”

He grinned broadly.  “Exactly.  Graham and I used to go for coffee every once in a while.”

Jessi aimed for a kind smile.  “Well, look Judd, I appreciate your thoughtfulness.  But you really don’t need to come over here and trim the hedges.  It’s very nice of you, but I’ll be okay.”

Judd shook his head.  “I promised Graham I’d check in on you, take care of things like this.”

“That’s great of you, but there’s no need.  I release you from your promise,” Jessi said, her patience wearing thin.

“It was a promise I made to Graham.  You have nothing to do with it,” he said reasonably and he prepared to continue with his work.

“I have everything to do with it.  Graham isn’t here.  You’re dealing with me, now.”

Judd let the trimmer hang down at his side and looked at her intently.  “You look like shit, if you don’t mind me saying so.  When is the last time you combed your hair?  You have little leaves in it.”

Jessi’s eyes went wide and she started to reply, but he cut her off.  “You do realize you’re standing in your yard wearing only a stained men’s undershirt, right?  I was trying to ignore it, but damn.  A guy can only keep his eyes averted for so long.”

Jessi glanced down to see Graham’s undershirt, which barely covered her panties and clung to her breasts like Saranwrap in the humidity of the morning.  “Shit!” she swore.

“No worries, Jessi.  I’ll be out of your hair as soon as I’m done with these hedges,” Judd said as he started the trimmers again and returned to his work.

Jessi hurried back to the pool deck and into the house.

I’m still hard at work on FOR SPARROW.  Stay tuned for news on a cover reveal and a release date.  In the meantime, check out the first two Dream Dominant books, LUKE & BELLA and LOST & BOUND.