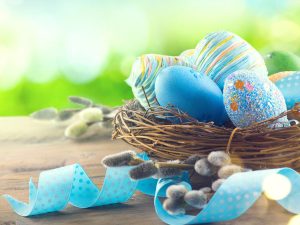 Happy Easter!  I hope you’re having a great weekend.  This week’s excerpt features an Easter scene from RESISTING RISK, the Finale of the Rannigan’s Redemption series.

In the last book of Rannigan’s Redemption, Michael watches as Maggie’s relationship with Bobby blossoms.  He’s pleased with himself, knowing that putting the pair of them together is merely one part of his plan to find redemption.

Bobby relished the time he spent with Savannah.  It occurred to him that maybe Deanna had made a bigger deal than necessary of the little girl’s illness.  His mood was thoughtful as he sipped his beer and watched Savannah running and playing with her cousins after a delicious meal on Friday evening.  The entire family had gathered at his sister Michelle’s house for a Good Friday dinner.  Now the adults relaxed on the patio as the children played on the lawn.

Everyone would be at Jerilyn and Justin’s on Sunday for the big holiday meal and traditional Easter egg hunt.  If Bobby knew his mother, she’d have been scrambling since he’d called to say the New York trip was off, putting together eggs at the last minute.  It would probably be up to him, his brothers-in-law, and his father to hide about half a million plastic eggs all around the outside of the house bright and early on Sunday morning.  He smiled contentedly.

“Bobby, can I get you anything?” his sister Michelle’s husband Russ asked.

Bobby shook his head.  “I think I’m just about fine.”

“Just about…” Russ repeated, grinning.  “Sounds like something is missing.  Rumor has it you have a new girlfriend.”

Bobby glanced around realizing that all other conversations had stopped.  The only voices were those of the children who ran squealing across the lawn.

“Ro-bert has found himself a city girl,” his mother said.  There was friendly laughter all around.

“Maggie’s not a city girl.  She’s originally from North Carolina.  She lives in New York now, just like I do.”  He dug his phone from his pocket, queuing up the photo of the two of them he’d taken at the Red Lantern Inn, and he passed it around.

“What does she do?” asked his sister Renée, who was pregnant with her second child.

“She’s a lawyer.  Works for the prosecutor’s office.”

“We were supposed to meet her this weekend but we couldn’t go, what with Savannah being sick,” Jerilyn elaborated.  “Ro-bert, tell them how you met her.”

Interested eyes were on Bobby.  He sighed.  “We met in the elevator in my building.  She was visiting someone who lives on my floor.  Her shoe broke when she stepped out of the elevator and she fell into the hallway.  I helped fix up her knee.”  He grinned at the memory.

Russ hooted.  “Oh, yeah, he’s got it bad!”  Everyone else laughed, and Bobby joined in good naturedly.

Later back at his parents’ house, Bobby tucked Savannah into bed and wandered back to the kitchen.  Jerilyn was putting together potato salad for Sunday’s dinner.  Bobby sank onto a stool at the counter and watched.

“How are you feeling, bébé?” his mother asked.  “You looked so tired this morning.”

“I’m good, maman.”  His phone blipped indicating a text message.  Checking it quickly, he saw that it was Maggie.

Jerilyn smiled knowingly.  “Is that your little girl?”

“What’s going on there, cher?” she asked softly.

Bobby sighed.  “She makes me happy.”  He looked up at his mother.  “She’s pretty, obviously.  And she’s smart and kind and funny and genuine…”  He trailed off.

Jerilyn crossed her arms.  “Is she another one of those little girls looking for a rich, famous man?”

He looked his mother squarely in the eye.  “No, maman.  Maggie had no idea that I’d played ball.  She couldn’t care less about sports or money.”  He laughed.  “She gave me eight pounds of shit, I mean crap,” he edited in response to her raised eyebrow, “when I bought her an antique dresser last week.”

Bobby gazed through the kitchen windows at the moonlight reflected on the marsh.  “She sees me.  Not some has-been retired pitcher.  I know that we haven’t been going out very long but…”  He looked down at his hands before meeting her gaze.  “I think I’m in love with her.”

A slow smile crept across his mother’s face.  “You’d better go give your little girl a call, then, bébé.”

RANSOMING REDEMPTION is available at this link: books2read.com/RansomingRedemption 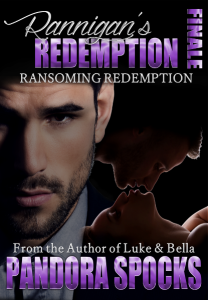