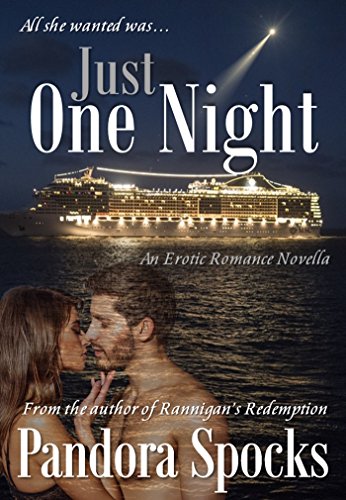 We’re here at the unofficial start of summer, and I, for one, could’t be happier.  Long hot days, even hotter nights…  Which makes me think of JUST ONE NIGHT, my naughty little summer novella.

I don’t normally write novellas, but this story was originally intended to be part of a multi-author steamy summer anthology.  The group project never actually materialized, so I went ahead and published the book on its own.

In JUST ONE NIGHT, teacher Katie Parker, fresh off the humiliating demise of her most recent relationship, is meeting her high school girlfriends for their annual summer outing.  This time, it’s a Caribbean cruise, and Katie’s determined to find a hot guy for a night of anonymous passion.

Mac Coleman is cruising to Mexico for his brother’s wedding when the pair meet on board the ship.  Their chemistry is instant.  But can Mac convince Katie that what they’ve found is worth more than just one night?

There was a knock at the door and Mac went to retrieve the wine and strawberries from the cabin steward.  He returned to the bed, tray in hand.  “Are you ready for a little wine?”

Katie shook her head.  “Wine can wait.  I want you.  I need you to finish what you started.”

He grinned broadly.  “Finish what I started, the lady says.”  He set the tray on the desk and paused to remove his pants.  Katie propped up and watched with admiration.

Mac sank onto the bed and stretched out beside her, kissing her deeply and pushing her onto her back again.  He positioned himself above her, his erection at her sensitive entrance.  He paused only to slip on a condom and slammed himself home.

His earlier attention had left her ready for him and she held on, moaning lightly from the moment he entered her.  Watching her unselfconscious abandon had pushed him near to his edge as well, and he had no desire to slow down.  He pummeled into her and she raised her knees, willing him to be as far into her as he could go.  He felt her walls begin to compress his cock and as she cried her release, he gave in to his as well, pumping until he felt her go limp again.

He pulled out gently and rested beside her, drawing her into his embrace.  “Oh, baby,” he murmured into her ear, “you are something else.”

Ten minutes later, Mac leaned back against the headboard, legs outstretched and crossed at the ankles.  Katie sat facing him, her legs curled beneath her.  Neither had bothered to get dressed.  He poured a glass of wine and handed it to her, taking another for himself.

She sipped gratefully.  “It’s good.  And I was thirsty.”

He smiled.  “It was quite a workout.”  Taking a plump red berry, he held it out to her and she bit into it, laughing when juice ran down her chin.  She swiped at it with her empty hand.  Mac laughed too and ate the rest of the berry.

“So how were the stingrays?”

Katie rolled her eyes.  “About like I imagined.  Very crowded.  I mean, they were kind of cool.  But the way they fluttered around my legs really creeped me out.”  Mac laughed appreciatively.  “I didn’t stay in the water too long.”

She leaned over him to take a strawberry from the dish, and she held it to his mouth, watching him bite into it.  The rest she popped into her mouth.  “After the stingrays, we had lunch, then lounged on the beach for a few hours.  It was heavenly.”  She smiled with the memory.  “The others decided they needed to go shopping, but I stayed at the beach for a while longer.”

“You didn’t want to go shopping?”  He crooked a skeptical eyebrow.

Katie shook her head.  “There’s nothing in the world that I need in those touristy shops.  Besides, the water and sand were hypnotic.  I just sat there thinking about…”  She looked to him sheepishly, her face flushing pink.

“Thinking about last night.”  He smiled knowingly.  “I did some of that myself.”  He fed her another strawberry.

“Um,” she swallowed, “how was diving?  I already know that you didn’t get rushed to the hospital.”

He laughed.  “No, no hospital for me today.  Diving was great, actually.  It usually is in the Caymans.”  He sipped his wine.  “Would you like to see the pictures?  I downloaded them onto my tablet.”

Katie set down her glass and rolled onto her stomach, knees bent, her feet hovering over her ass.  Mac cued up the dive pictures and slid the tablet in front of her.  He watched as she slowly scrolled through his photos of the tropical reef fish, coral, and other things he’d seen that day.

“These are fantastic!  The water is crystal clear and the colors are just amazing.”  He watched her frown.  “Is this a shark?”

He tilted his head to the right to look at the tablet.  “Yep, a Caribbean reef shark.”

Katie gaped at him.  “Just swimming along with you?  I would have lost my mind.”

Mac laughed good-naturedly.  “They pretty much leave you alone.  You just have to be aware of what’s going on.”

She shook her head, disbelievingly.  “No freaking way,” she muttered as she continued scrolling through his pictures.  He handed her another strawberry.  She chewed thoughtfully.  “Tomorrow is my pick.  We’re going to see the ruins at Tulum.”

“I’m kind of a history nerd.  It’s just intriguing to me.  People lived there for hundreds of years, probably assumed that it would always be there, then, boom!  Can you imagine being the last person out of there?  It boggles my mind.”

Mac smiled at the insight into her intelligence.  “It will be a great trip.”

Katie nodded.  “And in Belize, Chelsea is making us zip-line in the jungle.  It’s a pretty sure bet I’ll break my neck.  Michelle has declared the last day of the cruise ‘spa day’.  Which I’ll probably need, assuming my neck isn’t broken.”

“We should get together every night to compare notes on our adventures.”  Katie grinned up at him, the guarded look suddenly gone as her face lit up, completely open to him.  “What are you guys doing in Mexico?  Will you go diving again?”

He felt the knot in his stomach as a frown crossed his face.  “We’re getting off in Mexico.  Tommy’s wedding is in Cancun tomorrow night.”

Her brow wrinkled.  “You’re getting off in Mexico?  You aren’t finishing the cruise?”

He shook his head.  “No.  The wedding is tomorrow night.  The next day I fly home and load up the moving truck.  I start my new job on Monday.”

Abruptly, she pushed up off the bed.   “No, I’m sorry.  I wasn’t thinking.”  Her voice was soft, upbeat.  Her eyes betrayed her deeper feelings as her face closed again.  “Remember our deal—no strings, no expectations.  I just…”

She snatched up the fluffy white robe from the back of the chair and shrugged into it, stalking to the veranda door and crossing to lean against the railing overlooking the dark sea.  He padded out behind her, not bothering with a robe.

Mac approached her, wrapping his arms around her.  “I really am sorry,” he murmured into her hair.  “I didn’t mean to hurt you.”

He pulled her closer and held her, gazing out over the sea.  “Somebody hurt you.”  It wasn’t a question.  The compassion in his voice caused her stomach to clench.

“It’s not something I want to talk about.”

“I understand,” he murmured softly.

She whirled around.  “Just stop!  Stop being all…” she waved her hands in frustration, “understanding!”

Mac threw back his head and laughed out loud.  “I could try for asshole,” he laughed, “but it’s not really my style.”  He wrapped his arms around her again, drawing her close.  “You can tell me anything you want.  Or nothing at all.  Just know,” he gently kissed the top of her head, “you’re safe here.”

Katie felt herself soften in his strong embrace.  To be safe.  Understood.  The concept was almost foreign.  She sighed deeply and turned away from him to face the ocean again, but she pulled his arms tightly around herself.

He said nothing, just nuzzled her temple, planting tiny kisses behind her ear.

She sighed again.  “I met a guy online.  Stupid, I know.  Just…  I don’t meet many men in my day to day life.  So I took a chance.  He seemed nice, owned his own business, the sex was—“  She sheepishly glanced up at him.  “Until very recently I thought it was great.”  She felt the chuckle in his chest as it vibrated against her back.  “One day I surprised him with lunch at his office.  When I walked in he was standing with his pants around his ankles.  A blonde was sucking him off right there in his office.”

Mac tightened his grip around her shoulders.  “I’m so sorry, you,” he murmured against her ear.

Katie shook her head.  “I should have known.  I should have seen the signs or something.  How can I be so stupid?  I can’t make that same mistake again.”

He turned her to face him, both of them leaning against the railing.  “I was dating a psycho.  I’m moving partly to get away from her.  But I’ll tell you something.”  His face was earnest.  “I realized that if I shut myself off from love, try to protect my heart, I’m going to miss the real deal when she comes along.”

He looked at her meaningfully.  “I’d much rather take the chance.  I didn’t die from a broken heart.”  He smiled at her ruefully.  “Look, we can take this thing however you want, but I’m telling you, there’s something here.  Something more than a ‘one night only’ kind of thing.”

Katie shook her head dismissively.  “No, this is just a vacation romance.  Not even romance.  Just sex.  There’s nothing wrong with that.”  There was challenge in her eyes as she met his.

Mac nodded slowly.  “Like I said, we can take this any way you like.  But just know, I’m open to more.”

JUST ONE NIGHT is only .99, and it’s available at this universal link: