BROTHER’S KEEPER by Jolie Mason is out TODAY!  It’s the follow-up to BROTHER MINE, the beginning of the Brothers Assassins Series. 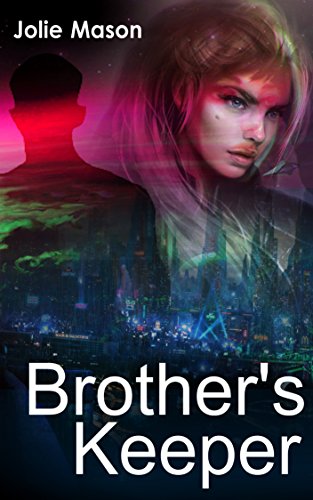 The world of the Brotherhood is falling apart. As a secret organization of guns for hire, they were an open secret among the rich and the political powers that be. Across worlds, the wealthy and the powerful knew who to call to get a job done.

But, among the brotherhood there is a debate about how to do what they do, and there is a rising rebellion among the men and women who kill because they had no choice. They are beginning to realize they may have more power than they realized, and power allows one choices.

BROTHER’S KEEPER is the second book in the series.  Here’s the description.

As an assassin, he lives on a razor’s edge of losing it all every day, but since Cari Renata came into his life there is so much more to lose.

Cari Renata’s sister is dead, or so she believes. And, Bry is the one who told her that horrific lie. Her sister is hidden among the Brax in Freedom Colony, and Cari can’t know. He promised his brother he would protect both the women they love with the lie. Bryson will do that at any cost.

Cari owns the universe, or at least a small part of it. She runs a major broadcasting conglomerate that spans several systems, but she’s an investigator at heart. Cari won’t keep pushing at the terror attack that supposedly took her sister’s life, and she’s poked the wrong beast in going after Todari House.

Bryson may have to break a promise to keep a promise, and come clean about Mal Renata’s real situation. When he does, it may cost him more than he ever expected.

Confession…  I have already read an ARC of BROTHER’S KEEPER and it’s fantastic!  Mason brings the sci-fi suspense and intrigue as usual, and this time she ups the heat.  How about a little teaser?

He watched her all the time. Told himself he had a legitimate reason. That’s what he told himself. He didn’t know if it was truth or a lie, but it was a good cover.

She was in danger.

Bryson stared at the monitor of his holo screen, as he pulled on a plain white, formal dress shirt that would be part of his cover tonight. The target was special this time.

Cari stood with her back to the camera drone, piling her long, golden hair onto her head in an elegant sweep and letting the tail of it drop again as she sat watching her reflection change to that sad, lost look she wore so often, when she thought no one would see. Only then did she let it show.

Cari was coming in for the night, not going out. Bryson was going to work. Their schedules were opposite most of the time, however, he monitored Cari with every resource he had. The men kept shifts in teams of four. No expense was spared.

Bryson looked at the chrono. It was getting late.

He did his best work late, and tonight he had an important job. This wasn’t a job for a client. It was personal. The Brotherhood was removing an obstacle.

Looking back at the holo, Bryson stopped with both hands on the fasteners of his shirt, his eyes glued to the screen, she pulled a tiny clip from her bangs, and continued preparing for bed, letting the fair waves cascade around her back in a shiny, silken skein.

True blondes were rare as doby eggs anymore, and it wasn’t in fashion. Most changed their hair color away from the blond. Not Cari, though.

She’d have a long road changing this one. Her blond hair accompanied a collection of recessive traits that were associated with some pretty ugly genetic anomalies that were nearly unheard of in this day and age of cloning and genetic manipulation, and people tended to think about the practical concerns in modern day, rather than how the light caught the colors making it look like sunshine.

However, as he stared at Cari Renata’s holo image, all he could see was the poetry of her: hair long and shining, the color of Desian honey, smaller, rounded breasts, long, long legs. Blue eyes that could, and did, go green with high emotion, especially when she was angry.

Had he ever seen them stay blue when she looked his way? He doubted it.

Still staring, though he shouldn’t, he saw more of that glorious body as she dropped the sheath dress she’d been wearing to some formal evening somewhere, and bent to pick it up from the floor. He could only see her back, and yet, even the barest glance made his mouth go dry.

He should look away. He knew it. He should give her the privacy she deserved. Yet, he didn’t.

She’d only worn panties beneath the sheath, a small triangle the color of her little black dress. Bryson’s hand clenched and unclenched at his side. He drank her in, even knowing it was wrong, that she would be angry. One day, when he confessed this, she would be so very angry.

If Todari didn’t kill them both.

If. It was that if that kept his eyes on her. These stolen moments could be all he ever had.

Sounds great, right?  Didn’t read the first book, BROTHER MINE?  No worries.  Here’s what it’s all about.

In a future world where aliens are hated, loving one is the most dangerous thing a girl can do. Mal Renata was born with the proverbial silver spoon in her mouth, but it never stopped her from becoming the voice of the Braxian people. As an activist fighting off mankind’s inevitable slide into cruelty and prejudice, she wants to stop the Scourge bill from becoming law, but how can she do that, if the bill’s supporters keep dying? Public outcry wants someone to pay, so she intends to give them someone.

Until she tracks down, Adame Sacha, a Braxian freedman and one of the notorious Brother Assassins, she thinks the brotherhood is her problem. Instead, she finds they may be the best allies she could hope for. Together, she and Adame search for those who are eager to profit from the suffering of the Brax, and they track their prey in a world where lives are held cheaply, but death is expensive.

They may be able to elude the dangers of his world for awhile, but they can’t run from the attraction to each other. No matter what their differences.

You can get BROTHER’S KEEPER at this LINK.