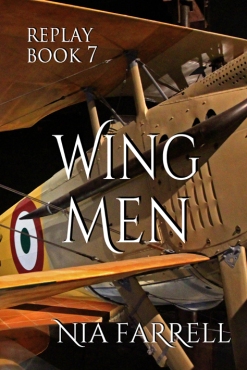 I love Wing Men for several reasons.  First, I LOVE this series and devour each book as it comes out.  And Wing Men has my own favorite fantasy, a MFM menage.  But the cherry on top is the red-haired leading lady (#MoreGingersInErotica).

I know what you’re thinking.  If only you could read a sexy little teaser…

An air raid signal sounded.  German soldiers grabbed their guns and took their places behind the sandbag barriers.  The planes came in low, strafing the field.  Bursts of blank rounds sounded from the German rifles.  Puffs of dirt flew into the air from charges that had been laid earlier.  The way that they detonated, it looked like bullets from the planes were hitting the ground.

Meanwhile, the German pilots were scrambling, climbing in their fighters, strapping on goggles, and preparing to start their engines.  Five ground crew members each took hold of a propeller and gave it a spin.  The radial engines roared to life.  Freed of their wheel chocks, the planes headed for the runway.

Dmitry was the last to take off, but his Fokker’s superb climbing ability allowed him to quickly join the others.  They flew only far enough to turn and meet the British head on.

From her vantage point, Dmitry and Alex’s planes seemed to be on a collision course.  She held her breath and fisted her gloved hands, watching, hoping, trusting that nothing went wrong.  At the last minute, the Sopwith Camel pulled up, barely missing the Fokker.

More passes were made.  Planes were “disabled.”  Billowing trails of blue smoke, the downed German planes landed here.  The “crippled” British planes returned to their imaginary base.

Finally, only three were left.  Dmitry, Alex, and another British pilot engaged in a stunning display of aerial combat, with all the climbs, rolls, and maneuvers that you’d expect in a big-budget motion picture.  Eventually, Dmitry simulated being shot, leaving a trail of smoke as he landed.  The two British planes flew off, victorious after their successful raid.

Cheers broke out from the crowd.  When the applause had quieted, Sir Piers addressed the spectators who’d come out for the morning battle.

“Thank you,” he said.  “What an amazing display!  The pilots shall all return shortly and will be joining us.  Lunch will be served at eleven thirty, to our reenactors, patrons, staff members, and guests.  The next reenactment, scheduled this afternoon at one, will be a German attack on a French airfield.  The final battle today at five pm will be a different version of this scenario.  Meanwhile, the bar will soon be open in the casino tent, where games of chance, music, and conversation may be found for those who wish to stay the day.”

While they had been watching the combat demonstration, a crew of workers had erected yet another tent, yellow striped with two massive center posts and a roof that would cover a one-ring circus.  She guessed that tables, chairs, and equipment were being carried in through a back opening.  The casino’s front door flaps were closed.

“I’m afraid that it is off limits to you, my dear,” Sir Piers said, “where you are not vetted.  Pity, but rules are rules where scenes are concerned.”

“I understand,” she assured him.  “But the day is lovely.  You’ve provided food, and shelter from the sun.  A place to sit and things to see.  I’m hoping to get a closer look at the planes, if they’ll let me.”

“I’m certain that can be arranged.”  He lowered his voice to a dramatic whisper.  “I know people.”

Lara laughed.  “I’m sure that you do.  Hopefully, he’ll be back soon.”

Sir Piers strained his ear, listening.  “I do believe that I hear a familiar stutter headed this way.  Alex should be here shortly.  I must leave soon to check on the situation at home.  With luck, I will not return alone.  We shall see.”

The German soldiers were already headed for the food tent.  The ground crews and pilots followed.  Lara sat in one of four folding chairs at a small round table in a shady corner of the space. With tea to drink and a scone to nibble on, she settled in to people watch.  It always fascinated her when costumed civilians and military reenactors intermingled.  And she loved listening to the reenactors who regaled each other with stories.  It truly was like stepping back in time.

Being a single female, sitting alone and therefore perceived as available, she halfway expected to be approached by the men, and possibly some of the women.  Introducing herself as a non-vetted performer worked like a charm.  Most of these people were here to play.

The only one who seemed to not mind that she couldn’t was Dmitry.  But then, she suspected that he looked upon her as a special challenge.  He took his time coming over, accepting accolades from the other reenactors and chatting with a few other guests.  Helping himself to a plate of late breakfast and a cup of coffee, he headed straight for her.

Lara managed to not smile.  “If that’s a question—May yousit here?—the answer is yes.  Yes, you may sit with me.”

Dmitry took the chair to her right.  His plate was heavy on protein and lower on carbs.  He spiked his coffee with a dash of whatever he was carrying in an antique silver flask.  Slipping it back inside his brown leather aviator’s jacket, he flashed an unrepentant grin.  “A touch,” he said.  “Safe to fly later.  Safe to sit now.  Tonight, I listen to you.  When done, maybe you listen to me.  We see.”

Alex’s voice dashed the flame that Dmitry’s smoldering delivery had ignited inside her, but only for a moment.  Alex and Dmitry were rivals in the air, but were they willing to share?  She didn’t want to choose between them.  She wanted them both, if only for the weekend.

She knew what she wanted.

Lara wanted it all.

“Alex,” Lara chirped, hoping that she managed to sound relatively innocent.  So many naughty thoughts were in her head right now, her mind was doing a spin that would have earned her a nine point five at the Winter Olympics.  “Won’t you join us?”

Dmitry bristled, but she ignored it.  Better to find out now if there was hope for both men tonight.  They would have to agree on a number of things—first and foremost, could they play with her together, or would she need to keep them apart?

Alex looked at his plate, at Dmitry, at her.  “I believe that I shall.  Thank you.”  He took the chair to her left, sandwiching her between them.

Alex’s plate was a balance of protein and carbs.  He and Dmitry had both taken sausage links and scrambled eggs, but Alex had added hash browns, a biscuit with butter and jelly, and several pieces of fresh fruit.  Dmitry had opted for half a biscuit smothered in sausage gravy and no potatoes.

Dmitry seemed to be enjoying the Russian equivalent of Irish coffee.  Alex drank milk and nodded approvingly at her tea.

“So, tell me,” she said, looking at Alex.  “This morning’s combat.  From down here, it looked like you two were going to take each other out.  When you’re sharing airspace, how close do you get before you pull away?”

He sliced an apologetic glance at Dmitry.  “Today, closer than I like.  The controls were slow to respond.  I’ll check it out before I take her up again.”

Lara took a breath and looked at Dmitry, too.  “You didn’t try to avoid him.  No evasive action that I saw, anyway.”

“Well,” she said, glancing at each man, connecting them with her gaze, “I’ve seen you share airspace.  I was wondering if—hoping that?—I might tempt you to share more.  Just so you know, I’m not a trained submissive.  I’ve never done anything much beyond having my wrists tied, wearing a blindfold, and getting spanked.  Pretty vanilla, I know.  But I’m willing, if you are.  Except that not being vetted limits us to what we can do on Replay property.  I’m going to leave you two to figure it out.  Come tonight and hear me sing.  After the concert, you can tell me what you want to do.”

She left them sitting, speechless.  It was a temporary state, she was certain.  While she went to look at the airplanes, they were probably stabbing at their breakfasts and dueling with each other for supremacy.

There can be only one…

Could two Doms be in control?  She thought so.  She hoped so.  One thing was certain.  If they wanted her, they’d have to learn to share.

You can get Wing Men,
Replay Book 7
TODAY at this link:
http://mybook.to/RB7 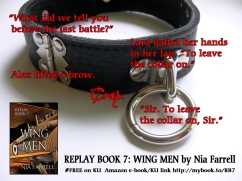 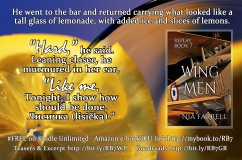 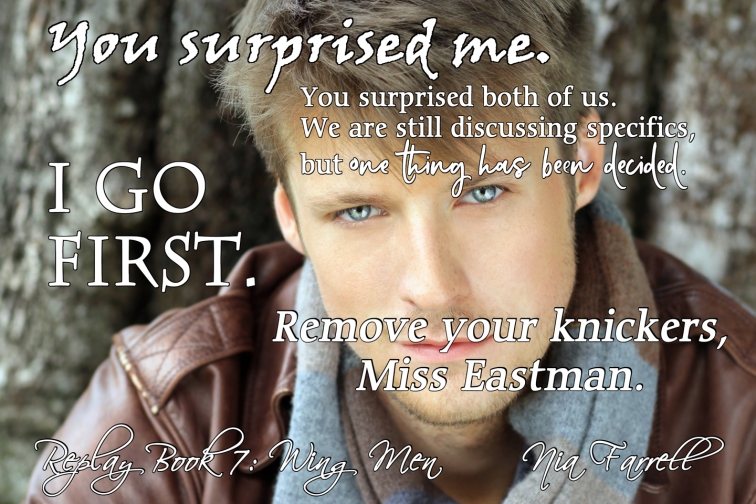