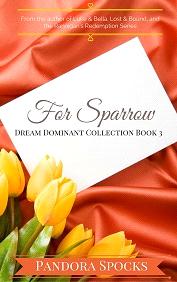 I’m so excited to tell you that Dream Dominant Book 3, FOR SPARROW, is finished and currently in edits.  This cover is just a mock-up I made when I first began the project over a year ago.  Erotica author and fellow Wicked Pen Linzi Basset is currently at work creating a hot new cover.  Stay tuned for news of the official cover reveal and for release day.

Set in my hometown of West Palm Beach, FOR SPARROW is about Jessi Crenshaw, recently widowed and mourning the loss of her husband, lover, and Dominant.  But it turns out that her husband Graham had had an inkling that his health was on the decline, and he tapped a temporary replacement for himself.

Enter tall, sexy, and Dominant firefighter/paramedic Judd Farris.  He’s agreed to watch over Jessi, to give her knee time when she needs it, and to give her the boundaries she craves.  But it’s a damn odd arrangement, platonic Dominance and submission.  How long can the keep this up?

So for this weekend’s excerpt, I wanted to give you a little teaser from FOR SPARROW.

They enjoyed dinner on the patio, the sky shifting from the orange and pink Jessi had noticed upstairs to a deep indigo twilight, the stars blinking on over the gentle swells of the ocean.  The teak table was lit with a pair of citronella candles against the odd mosquito, and Judd had built a fire in the pit just off the patio.

Conversation over their grilled mahi dinner and sauvignon blanc centered on their adventures over the past couple of weeks.  The mood was light and happy, and Judd, for one, was glad for Jessi’s company.  Her face lit up as she recounted her surfing attempts and the pair laughed easily.

Buddy devoured his bowl of kibble and promptly passed out again.  Judd and Jessi carried their dishes into the house, quickly restoring order to the kitchen.  Jessi glanced at her watch and decided that she should be leaving soon.

“Do you have to go?” Judd asked, noticing her checking her watch.

“Oh, you know, I should probably head home.”

“We haven’t had dessert yet.”

Jessi chuckled.  “I’m so stuffed from that delicious dinner.  I don’t think I could take another bite.”

“Come on, Jessi, there’s always room for dessert,” he coaxed.  “Wait til you see.”  Judd opened a cabinet, removed a few items, and placed them on the counter.

Laughing again, Jessi followed Judd back outside.  “I haven’t had s’mores since…  Well, probably not since that time I took the kids camping.”

“Then you’re long overdue.  This stuff is left from when my sister and niece were here.”  He took two steel barbecue skewers, placed two marshmallows on the end of one, and handed it to Jessi.

“One, please.  I just want one marshmallow.”

He grinned, sliding a single marshmallow onto the other skewer, and they traded.  “Lightweight,” he teased.  “Now, let me show you how it’s done.”  He held the marshmallows a distance away from the flames, allowing them to slowly begin to warm.

“Careful there, you might accidentally roast those guys,” Jessi jibed.  She poured more wine for him and for herself.

“Kid if you must,” Judd replied, “but these bad boys are going to be perfection.”

Jessi sipped her wine, watching as the marshmallows began to slowly expand while remaining pristinely white.  “I have a different method,” she commented.

“Yup.”  She prepared a graham cracker, breaking it into two pieces and placing a square of chocolate on one of them.  “Watch and learn, fire boy.”

Taking her skewer, she fixed him with an arched eyebrow before plunging her marshmallow directly into the flames.  When she pulled it out again, the round white confection was engulfed in blue flame.  Gently, she blew out the fire to reveal a charred marshmallow.

“You burned it,” Judd observed.

“It’s crispy on the outside, gooey on the inside.  Pure perfection.”  She lay the marshmallow on top of the chocolate and used the other graham cracker to slide it off the skewer.

She waved her hand over the top of her dessert with a triumphant flourish.  “Tah-dah!”

By this time, Judd’s marshmallows had tripled in size and were just beginning to turn a toasty golden brown.  “See, this is how you make a s’more.”  Carefully, he carried his marshmallows to the table where Jessi had prepared his graham crackers and chocolate.  He slid the marshmallows off the skewer and pressed the top cracker on, gooey marshmallow running over the sides.

Judd motioned for Jessi to sit, and he perched on the stool at an angle to her, their knees just brushing under the table.  He lifted his s’more and held it out to her.  “To adventure!”

Jessi picked up her own dessert and touched it to Judd’s, laughing lightly.  “Adventure.”

He continued to watch her thoughtfully as she nibbled her s’more.  “Thank you, Jessi, for such a great day.”

In the candlelight, his eyes flickered and Jessi felt the tingle in her belly.  And lower.

“It was fun.  It really was,” she murmured, hoping the dim light hid her blush.

Judd bit into his s’more with gusto, leaving a trail of marshmallow down his chin that dripped onto his shirt.

Jessi giggled happily.  “I knew that was too much for one s’more.”

“It was just the right amount,” Judd returned, sweeping the errant goo off his shirt and licking it off his finger.  “The graham cracker just couldn’t hold all the awesomeness.”

“You missed a spot.”

He cocked his head, trying to see his chin.  He aimed his tongue at the corner of his mouth.  “Now?”

She shook her head and slid off her stool.  “I’ll get it.”  Stepping closer, she swiped her finger up his chin, removing most of the white confection.  Without thinking, she popped her finger into her mouth, but she didn’t miss the heat in his eyes.

Impulsively, she leaned forward and lapped at the corner of his mouth.  He tasted of chocolate, marshmallow, salt water, and sin.  A low groan emanated from Judd’s chest.  Jessi leaned back to look him in the face.

“Little one,” he whispered.

Stepping deliberately closer, she straddled his right knee and leaned in again, planting light kisses where the marshmallow had been.

Judd placed his hands on her hips and moved her back a bit.  “Are we crossing this line?”  His voice was soft, hopeful.

He didn’t wait for further permission.  He wasted no time in claiming her lips, devouring them as he pulled her closer, raising his knee to meet the warm needy place between her thighs.

Jessi gave herself over completely to his kiss.  She’d craved it for longer than she was willing to admit to herself.  She’d loved Graham.  But Graham was gone.  And he’d given her permission to move on.  It was time she gave herself permission.

Judd broke off the kiss and stood her back from him, steadying her when she wobbled a bit.  He fixed her with his best Dominant glare.  “You will be kneeling at the foot of my bed in two minutes.  You will be dressed.  I will undress you.”

Again, FOR SPARROW is still receiving the finishing touches.  As soon as the cover reveal is scheduled, I’ll let you know.

For now, though, I want to invite you to join my fun new Facebook group, Pandora’s Passionista Paradise.  It’s about fun, friends, and hot books.  Today, I even had a little giveaway, just saying…  I’m there everyday, so come and say hello!  https://www.facebook.com/groups/PandorasPassionistas/