FOR SPARROW, Dream Dominant Book 3, comes out October 3.  It’s the story of Jessi Crenshaw, whose husband Graham dies unexpectedly, leaving her mourning the loss of her husband, lover, friend, and Dominant.

As it turns out, Graham had an inkling that his health was in decline, and he made provisions for Jessi.  He tapped his friend and protege in the Lifestyle, firefighter paramedic Judd Farris, to step in as Jessi’s surrogate Dom, at least until she gets back on her feet.

They move forward in a platonic D/s relationship, but soon find it hard to resist their mutual attraction.  Unknown to them, however, is the fact that danger is heading in their direction.

FOR SPARROW marks the first time I’ve ever written a proper villain as a character.  Today, meet Gary Wayne Gentry. 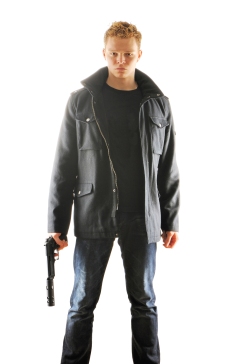 Gary Wayne Gentry is a nondescript little man with dreams of being someone important.  He’s the guy who’s always on the outside, looking in.

He yearns to do a job that requires a uniform, but he was unceremoniously drummed out of the army for attacking a fellow recruit.  And after they see the results of his personality inventory, he can’t land a job with either the police or fire department.

Tired of not being noticed, he embarks on a violent cross-country tour, targeting first responders along the way.  He’ll show them.

Here’s an all-new excerpt featuring the villain of the story.

Gary Wayne Gentry stood watching as firefighters fought to extinguish the blaze in Parson’s Hardware on the main street of Baker City, Oregon.  He was merely one in a crowd of lookie-loos that had gathered on the opposite side of the street, a guy so nondescript that no one would ever remark on the short, balding man with a slight paunch.  No one would even notice him.  Which used to bother Gary.

Used to.  But he’d learned that being unnoticeable could be an asset.

He watched as the supervisor barked out orders to the firefighters on the ground.  Hoses were deployed, plans were followed.  Soon enough, thick black smoke turned white.  Which meant the fire was out, there were merely a few hot spots that merited attention.

He knew this because Gary had always wanted to be a firefighter.  Or a cop.  Or a soldier.  Some damn thing with a uniform.

He’d actually been in the Army for a short time.  Until he’d been involved in an altercation with a fellow recruit.  It hadn’t been his fault.  Gary Wayne Gentry didn’t take shit off of anybody.  The cry baby had had his jaw wired shut for a few weeks, and everybody lost their mother-effing minds.  To keep the bureaucratic wheels running smoothly, they’ve given him a General discharge, and Gary was adrift once again.

He’d tried the police and the firefighters, and gotten damn close, too.  It was always when they saw the results of his personality inventory that they said, “Thanks, but no thanks.”

Watching the Baker City FD roll up their hoses and gather their other equipment, Gary snorted.  Always so GD superior, like their shit don’t stink.  Probably effing volunteer, sum’bitches.

He had a uniform, mind you.  Like that was hard to get.  There was a uniform store on every corner in America.  Sometimes he’d dress up and go to a bar.  It was usually enough to get a few free drinks.  Gary would spin some yarn about the fires he’d put out, and the people he’d saved.  That only lasted so long before people got tired of listening.

Firefighters probably got a lot of pussy, too.  Only so far, the fake uniform hadn’t yielded much of that.

And the problem with small towns was, although he was reasonably anonymous, people would notice a man with a gun.  That much he was positive about.  A crowd that small, someone would definitely notice if he tried to pick off a firefighter or two.

Which was a pain in the ass, because that was the whole point of starting the fire anyway.  What, did you think Gary Wayne Gentry was just a firebug, one of those pathetic bastards who got their rocks off watching fire?  Please.  The fire was simply a means to an end.

He used to listen to scanners and try to show up at fires and car accidents and such.  But who has time for that, really?  When you set the fire, you know exactly when and where they’re going to show up, it’s not rocket science.

Anyway, clearly, Baker City, Oregon was way too small for him to be able to indulge in his favorite sport.  But then, you live and you learn, don’t you?  He’d worked his way up the west coast with a moderate degree of success.  Los Angeles and San Francisco had been goldmines for his little pastime.  So crowded, so full of crazies.  When the odd firefighter here or there, and one cop, he was proud to say, ended up shot at emergency calls, the authorities always blamed gang violence or some such nonsense.  Sometimes he wondered if he should be offended, gangs getting the credit for his work.  But he wasn’t ready to stop, so the better for him if he remained unnoticed.

If someone, his mother for instance, bothered to ask him, “Gary, why do you do these things?” he knew exactly what he’d say.

As the last of the onlookers left the scene, Gary decided that remaining unseen was the best plan, so he mosied on back to his beige Chevy Impala and drove away slowly.  There was one thing he was sure of.  He sure as shit couldn’t go any further west.  He laughed, imagining himself driving into the Pacific Ocean.  So, east it was.

Heading off into the dark night, he considered his choice of hobbies.  It was unorthodox, maybe.  But it wasn’t his fault, not really.  His name was Gary Wayne Gentry.  Seriously, his mother should have known better. 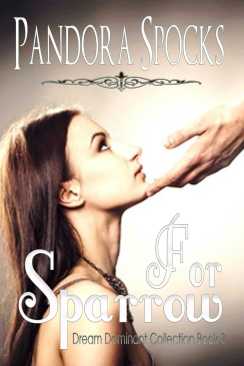 FOR SPARROW is available at the special pre-order price of 99¢.
After launch day, October 3, it will return to the regular price of $2.99.
Reserve your copy today at books2read.com/ForSparrow.