LUKE & BELLA is the story of two professional television journalists who are thrown together to produce a new travel program.

Bella, an experienced reporter and news anchor, is thrilled at the prospect of the job of a lifetime–traveling the world and creating great television.

Luke’s more jaded.  World-weary, he’s coaxed out of premature retirement by the promise of complete creative control over the project.  Well, shared control with the host of the show, a redhead with “nice gams,” according to his old friend and executive producer, Charlie.

Traveling to exciting cities, staying in luxurious hotels, it’s no wonder they fall in love.  But it all happened so fast.  Luke realizes he hasn’t been completely honest with Bella.  He’s Dominant.  And he thinks she’d be the perfect submissive.  If he tells her now, he could lose her forever.  Or, he could risk everything on the chance that they could have it all.

So I’m celebrating the new cover with this excerpt from LUKE & BELLA.

Luke ordered a light dinner of tapas delivered to the suite along with a bottle of local wine.  Bella wore a fluffy white bathrobe.  He’d put on faded jeans and a grey t-shirt.  She smiled lazily at him across the table, a woman sated.  He poured them both some wine and they nibbled on the baked feta and tomatoes, olives, and fresh fruits and breads.

Bella sighed and said, “I was thinking…”

She gave him a wry smile.  “Seriously!  I was thinking about that really nice evening you planned for us in Edinburgh.”

“Yeah, you liked that, did you?” he asked, grinning.

“Um, yeah!  Wine, music, flowers, an amazing dinner, mind-blowing sex…what’s not to like?” she said.  “But, I was thinking that I should plan an evening.  You know, it’s my turn.”

“No, I don’t think that’s necessary,” he replied slowly.

“Not necessary?” she laughed.  “I’m not saying I feel obligated, just that I’d like to return the favor, so to speak.”

Luke waited a moment, considering his response.  The timing’s a little sooner than you planned, Cowboy, he thought.  Play it safe or risk losing her?  Decision made, he took the risk.  “The thing is, I’m not a fan of surprises.  I’m something of a…dominant…kind of guy.  I like making the plans,” he said evenly.

Bella looked at him, brow furrowed.  “You’re a ‘dominant kind of guy’?  As in, Dominant/submissive ‘dominant’?” she laughed lightly.

“Well, yes,” he said, looking at her directly.

Luke shook his head.  “No, not kidding.”

Her eyes went wide and her mouth hung open slightly.  “I don’t understand.  What does that mean that you do?”

He shrugged.  “Whatever makes me and my partner happy.  Blindfolds, restraints, spanking, safe words.  When we play a scene, she is mine, completely surrendered to me.  And I protect and care for her.”

When she didn’t reply, he continued, “It’s not a big deal.  I like to be in charge when it comes to romance, to sex.  I like to be the protector, to take care of my woman.  And,” he added softly, “if it doesn’t blow your mind too much, I think you are the perfect submissive.”

She shook her head slowly, eyes wide with disbelief.  “You are SO barking up the wrong tree.  I am anything but submissive.  I need to be in control.”

“I’ve noticed,” he said quietly.  “But you’re not good at it.  I said before that you try to control things by putting them into neat little categories, boxes.  When that doesn’t work, you shut down.  Imagine not having to control.  Not having to think or worry.  Just letting go and allowing someone else to be in control for a while.”

“I don’t even know what you’re talking about,” Bella whispered.  “You have lost your mind!”

“I understand your reservations.  Between your father and your ex, you’ve never had a man in your life that you could completely trust,” he said gently.

Bella felt as though she’d been gut-punched.  His words rang in her ears and she knew they were true.

“I am that man, Bella.  Do you trust me?  You can completely let go.  It will be the most freeing experience of your life,” he stated with quiet confidence, looking at her steadily, hoping to reassure her.

She abruptly left the table and went into the bedroom, emerging a few minutes later completely dressed in jeans and a white tank top.  On her face was the hard, closed expression he’d seen that night in Amsterdam.  “I’m going out for a while,” she told him firmly.

“Bella, I wish you wouldn’t go alone.  It could be dangerous,” he worried.

She waved him off and walked out the door, closing it behind her.

“Shit!” Luke exhaled deeply, and he ran his fingers through his hair, wondering if he’d made a mistake, if he’d lost her. 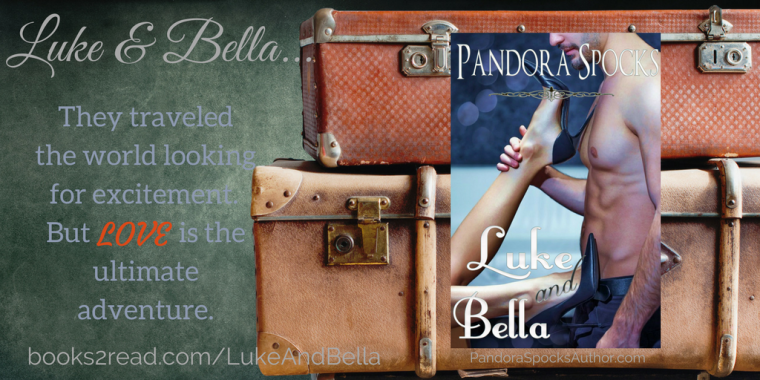 Not only does LUKE & BELLA have a beautiful new cover, I redid the interior as well, using one of the new themes on Draft2Digital, so it has a fresh new look inside, too.  Be sure and check it out.  New paperbacks will be available soon…

You can get your copy at books2read.com/LukeAndBella.