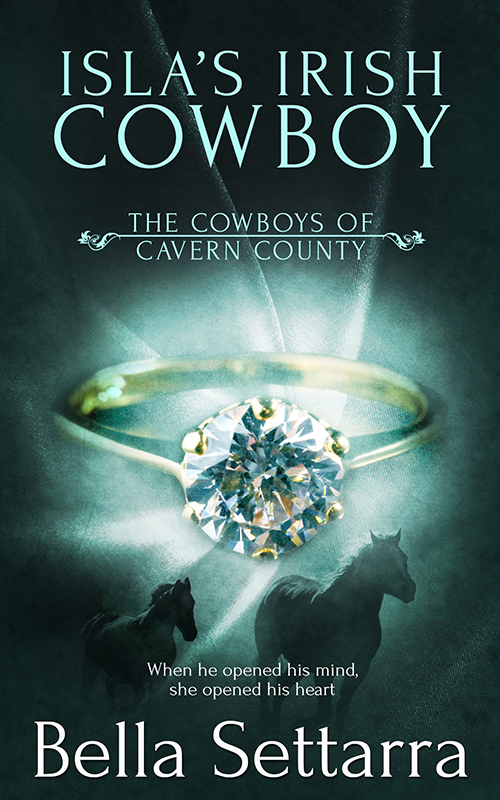 New out from Bella Settarra, it’s ISLA’S IRISH COWBOY.   It’s Book 4 of the Cowboys of Cavern County.  I just ‘met’ Bella recently, and she’s already one of my favorite people for lots of reasons, not the least of which being the fact that my first ginger heroine is called Bella.

With this book, I have to tell you she had me at ‘Irish cowboy.’  So I was dying to know what it was all about.  Here’s the blurb…

Isla Gillingham is a beautiful, successful model – so she’s bound to be a spoiled, selfish diva, right? At least that’s what Kean Maguire presumes until he meets her. His impression of her changes in a heartbeat when he sees her dressed casually, eating fries, smiling and giggling.

Not one for socializing, Kean is secretly happy to volunteer to take Isla and the photographer into the mountains for a photo shoot – until Isla’s manager, Tabitha Merchant, warns him that there is a powerful legal team ready to pounce the minute he slips up, and a court battle will not only lose him his job, but also result in the closure of the Fielding Ranch.

Isla is immediately taken with the Irish cowboy, and thrilled when he leads their trek into the mountains. His demeanour is anything but friendly, however, and even worse when an accident occurs on a narrow ledge.

Reluctantly, she allows Kean to offer her shelter at his cottage when the weather deteriorates. Given the chance to learn more about each other can she persuade him that she is not the calculating bitch he assumed? And is his heart really as cold as the ice outside, or will it melt with the driven snow?

As Isla admits that her life isn’t quite as happy as it seems, Kean must disclose his unsavoury past, despite knowing it could completely turn her against him. But their lives change entirely when they discover they are not the only ones keeping secrets…

And knowing you guys, I went ahead with the adult excerpt.  You’re welcome!

Kean tangled his fingers in her soft, blonde curls. He stroked the smooth skin of her neck, causing her to buck deliciously up toward him with a soft moan.

He had never felt anything like it. It was like running his fingers through velvet. Her shoulders were like silk, and he couldn’t resist trailing one hand down her body. She was so sensitive, and jerked violently as he caressed her skin. He grinned. He’d remember that. The way she had reacted to his teasing with her feet had surprised and delighted him, and it was good to know her whole body was a mass of nerves, just waiting to be teased mercilessly – and he was just the man for the job.

Isla arched her back, pushing her gorgeous breasts hard into his chest. He watched her face, her eyes fluttering open and closed all the time as she writhed beneath him. God she was hot!

His rock solid erection jabbed into her softness as it strained against the denim of his jeans, desperate for its release. Desperate for her.

Kean kissed her again and she groaned into his mouth. Her fingers dug into the back of his neck and she clung to him for dear life. Their tongues fought wildly against each other as their rampant breathing filled his ears.

Isla grappled at his waistband, her need surpassing her manners, and he loved it. Her slim fingers slid between his skin and the button which she quickly unfastened, and he sighed inwardly as she tugged at the metal zipper which was wedged against his ardor.

With a deep chuckle he slipped his own hand down between their groins, chancing a brief stroke over her pussy while he was there. Her breath hitched. Good.

He felt her nimble fingers caress his as he yanked hard on the zipper, and her hand covered his as he slid it down, freeing his desperate cock. Staring into her face for a reaction he was relieved at the way she licked her lips, panting hard. Her eyes were on fire, pleading with him, and he didn’t need asking twice.

Kneeling backward he pulled the denim down his thighs, then quickly stood as he hauled the jeans off his legs. The cooler air wafted across his glistening skin and he welcomed it like a long-lost friend. His whole body felt like it was a furnace and he longed to divest himself of the last scrap of fabric which clung to his groin like a wet rag.

Isla was watching him, biting her lip, her chest heaving up and down as she panted. Her hands were at her waistband and he watched her unfasten her belt and then her button. As her fingers reached for her zipper he took a step toward her.

She stared up at him, her eyes full of hope.

Kean grinned, running a finger over the denim which covered her pussy.

He nodded and slowly pulled at the zipper. Her whole body felt tense to his touch as he took the waistband and gently hauled the fabric from her and threw it next to his own jeans.

Her legs were smooth and freshly-waxed. Her pink satin panties were plastered to her pussy in a dark, sticky mass of passion. He watched her chest heaving and her eyes stared at him, full of desire. She raised one knee, sliding her foot slowly up the bed, and put her arms above her head, offering herself to him while at the same time teasing him.

His cock twitched at the sight and she licked those full lips of hers again. The ache in his groin told him he couldn’t wait much longer and he hoped that the look in her eye was telling him she felt the same.

Although desperate to jump on top of her, to feel her skin once more, he couldn’t resist gazing at her beauty for one more minute. She posed beautifully and he wondered if she had ever had photos taken in just her underwear, or less. If she had he would love to see the results, although he would be jealous of the photographer who shot them. He wondered if it would be Stefan. His earlier concerns about them being an item had dissipated when they had been up on the mountain taking pictures. The camera loved her but Stefan didn’t. He flirted with her but there was no real emotion between them. And he would know – he had scrutinized her every move, every expression.

“Kean?” Her voice was smooth, like melted chocolate and he suddenly realized he was staring at her.

His cock reacted to her before the rest of him. He smiled and she visibly relaxed. Slowly he kneeled on the bed. Isla’s hand reached out to him and he took it in his. Her skin was like the satin of her underwear.

Gazing at her gorgeous face, he gently kissed the tips of her fingers before trailing them down his torso and planting them on the waistband of his briefs. She gasped with surprise, but took hold of the elastic, still staring back into his eyes. Carefully she peeled the fabric from his body, allowing his cock to spring free of its confines.

Relief washed through him and he balked at the sensation. Isla continued to pull the sodden fabric down his legs, still watching only his face. He put a hand down and helped her remove his briefs and then took her fingers and placed them around his throbbing member. Only then did she look down.

Use this LINK for your copy of ISLA’S IRISH COWBOY.

In Bella’s world all the heroes are gorgeous hunks and the heroines are always beautiful. Having said that, she firmly believes that ‘handsome is as handsome does’ and that ‘beauty is in the eye of the beholder’. (She is also a big fan of clichés as well as alliteration! J)

She also loves writing Cowboy Romances and was thrilled when the first book in her The Men of Moone Mountain series, (Etopia Press), entitled Ménage on Moone Mountain, received a nomination for the Ménage Romances Fan’s Award 2015 and became an ARe Bestseller, and the third book in this series, Ménage on Ryder Ranch was also nominated for the Erotic Ménages Romances Award 2016. The fourth book in this series, Ménage at the Mode Boutique is now also available in digital format. She is currently writing another Cowboy series, Midnight in Montana (Siren Publishing), the first of which, Dallas at Midnight, is already available in digital and print formats, while the second book, Meet Me at Midnight, is available in digital format at present. Her latest release is Isla’s Irish Cowboy, which is the fourth of her new series, The Cowboys of Cavern County (Totally Bound Publishing).

Her writing career began, however, in the fantasy/myth genre, with her first series Sirens and Sailors (Siren Publishing). Although this was a series of six novels, it actually started out as a short story! This was a delight to write and was proof positive that her High School Classical Studies lessons weren’t entirely wasted.

She has also had a couple of short stories published in Men for Hire and Men for Hire 2 (Luminosity Publishing) and a paranormal story in the anthology Shared for the First Time (Romance Rebels Publishing). She even had some rather raunchy poems included in Coming Together in Verse.

Not everyone is perfect – but it’s the character flaws which make them interesting, she believes. As in life, things don’t always run smoothly, but  the twists and turns provide the drive to keep going, even when it just feels like an uphill struggle. Bella is currently fighting her own battle against breast cancer – a battle which she is determined to win – and believes that all women have the right to feel sexy even when they are battle-scarred.