Beautiful redhead women with bag and bokeh at background

A young,stylish couple in love,a woman in a short dark-colored dress and a man in a light brown jacket and white in a dark striped shirt,standing next to each other on a city street,hug and look in the same direction

In my last post, we met Michael Rannigan, the irresistible bad-boy title character.  Today, meet Maggie Flynn, the woman who causes Michael to question the way he lives his life.

About to graduate from law school, Maggie has her life all mapped out.  But when she sees Michael taking interviews at a job fair, she takes a chance, and he hires her nearly on the spot.

Attracted to him from the start, Maggie realizes that her crush on Michael is all but hopeless.  He’s a self-absorbed womanizer. But beneath that cool exterior, she’s seen the man he can be and she’s sure that love can bring that out. In the meantime, she’s content to work with him.

In this excerpt, Maggie meets Michael for the first time.

I’m getting too old for this shit.  Should have called in sick today.

As a partner at Murphy, Rannigan, there was no one to question his absence.  But it was his turn representing the firm at the job fair at NYU.  Brian Murphy was out of the country on vacation.  And James Metheny was recovering from surgery.  Tonsils or some shit, Michael mused.  Didn’t everyone have their tonsils out when they were five?

Sure the firm needed new talent.  But why did he need to be there?  He knew exactly why.  Without his presence, John Hemphill would be the senior man there, and that couldn’t happen.

Hemphill’s an idiot, he thought.

The car dropped him at the entrance to Vanderbilt Hall.  He knew it well.  After all, NYU was his alma mater.  He took a moment to straighten his tie before entering the building.  As expected, the hall was full of fresh young faces, soon-to-graduate litigators who needed jobs.  Unconsciously his eye roved, looking for nubile young female candidates.  Not necessarily for the firm, mind you.  He was always on the lookout for his next conquest.  He passed a group of girls who giggled as he walked by.

“Ladies,” he greeted them, flashing his mega-watt smile.

Just get this over with, he begged as he zeroed in on the Murphy, Rannigan table.

Already seated at the table were John Hemphill, Stan Hodges, and Ellen Standifer.  The trio were associates from the elite 50th floor of Murphy, Rannigan.  They were good enough at what they did, which was mostly research and legwork, with the occasional foray into the courtroom when necessity called.  Each had a laptop and on the table was a spreadsheet they’d worked out back at the office.  Of course, they’d vetted possible candidates before they ever set foot at the university.  Preparation saves time in the long run, they knew.

Michael took a bottled water from the table and sipped, standing behind the three and continuing to scan the room.  “What’ve we got?” he asked.

Hemphill gave him a brief rundown.  “We’ve interviewed five candidates so far, five of the ones we were interested in.  We’ve turned away about a dozen others that didn’t meet our standards,” he related in his adenoidal drone that so grated on Michael.

“You’re turning away interviewees who aren’t on your candidate list?” Michael snapped.  “How sure are you that your list is accurate?  Paper and data don’t always tell the story.”  Hemphill reddened a bit.

“Well, I…” the man floundered.

Michael grinned to himself.  It’s the little pleasures in life that make it all worthwhile, he thought.

He watched as a young woman crossed the floor, seeming to make a beeline for their table.  She was petite, with red hair, and she was wearing a grey suit paired with a green silk blouse.

What have we here, he wondered.

“Hello,” said the young woman.  “I’d like to interview with your firm.”  She reached across the table to shake hands with the attorneys seated there.

“And you are?” Michael asked, still standing behind the others.

“Oh, sorry,” she said, clearly flustered.  She opened her folio to remove copies of her resume and several slipped out, sailing across the floor.  Michael watched in amusement as she scrambled to gather them up again.  “Sorry,” she repeated, as she handed a document to each of them.

“Mary Margaret Flynn,” Michael read from the top line of the resume.

“Have a seat, Ms. Flynn,” Hemphill directed as they read over her resume.  Standifer pulled up Mary Margaret Flynn on their database and Hodges located her name on their spreadsheet.  There were two stars beside her name.  How have we not spoken with this one yet?

Michael took a seat directly across from her.  He was impressed with the resume, and he’d found her name on the spreadsheet before Hodges had.  He looked from the document back up to her face.  Her green eyes were wide and as she sat, she fidgeted nervously with the atrocious vinyl folio containing her resumes.

“So Ms. Flynn, your resume is impressive.  It says that you interned with Rance Stockwell at the DA’s office.  I’m surprised he hasn’t offered you a job.”

“Looking for better offers, are you?” Michael asked, arching an eyebrow.

“I have a great deal of student loan debt,” she confessed.  “It makes sense to me to look around and find my best options.”

Michael leaned back in his chair.  “Are you familiar with our firm?” he asked.

“Yes, actually,” Maggie answered.  “I heard you speak once at a charity luncheon.  You said that everyone is entitled to the best defense possible, regardless of the circumstances of their charges.”

Michael tried to suppress a smile.  “I said that, did I?”  The others at the table snickered.

Maggie’s face reddened a bit as she glanced down the line of lawyers.  “It really resonated with me,” she said quietly.  “I also tried one of your cases as a mock trial project.”

“Which case did you choose?” asked Michael.

The other three snickered louder and Michael looked down at his notes, suppressing another grin.  “Well, Ms. Flynn, if you were going to try one of my cases, you might have chosen one I actually won.”

Maggie glared indignantly at the panel.  “I, well, I tweaked it a little.  I uncovered evidence that you overlooked.”  Michael sat up straight; she had his undivided attention.  “Testimony in the deposition was contradicted on the witness stand.  The victim stated in the deposition that she’d met the defendant two weeks prior to the incident.  On the stand she said she’d just met him that night.  It was enough doubt for the mock jury.  I won your case.”

Michael looked at the other three.  If someone had dropped the ball on the case, he or she was currently seated at the table.  They all looked down, suddenly intensely interested in their notes.

He cleared his throat.  “It seems, Ms. Flynn, we have everything we need.  We’ll make a decision by the end of the week and let you know.”

Maggie stood and reached out her hand.  “Thank you for your time.”

“Thank you,” Michael nodded, shaking her hand.  He watched her walk back across the room and disappear in the crowd.

RESISTING RISK is available at all the usual online booksellers
for just 99¢.
But it’s FREE when you subscribe to my newsletter,
Pandora’s Box Unleashed.
https://www.instafreebie.com/free/EvsRs 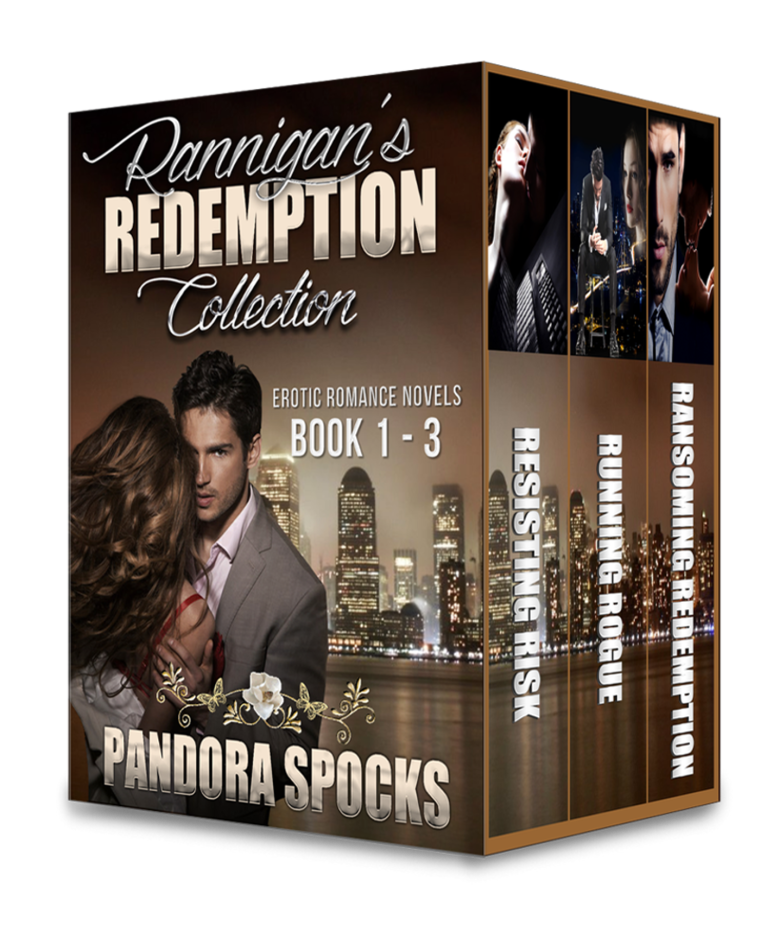 You can also find the entire trilogy in one complete boxed set.
books2read.com/RannigansRedemption