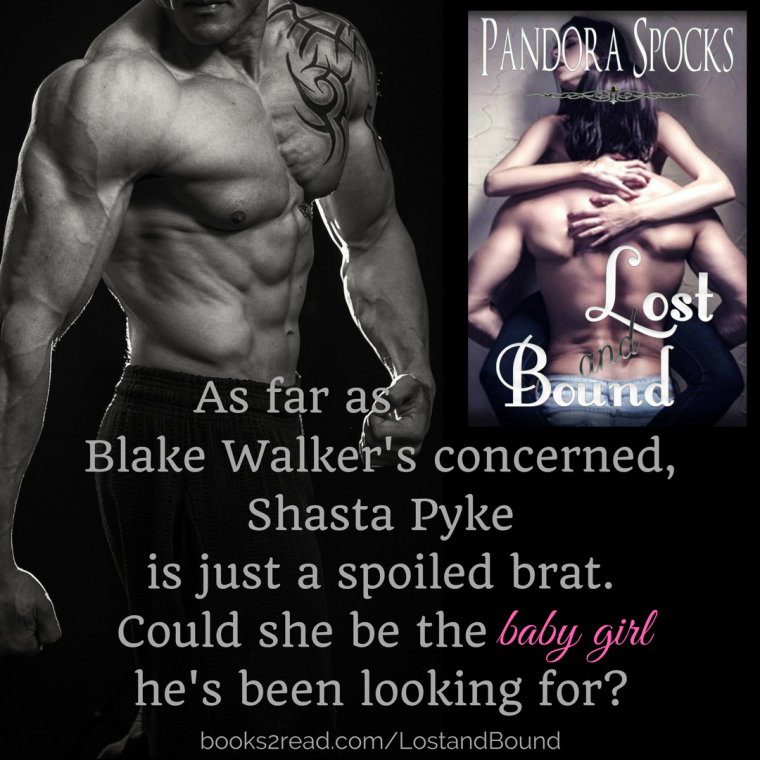 Hollywood bad girl Shasta Pyke is used to getting her own way.  But she’s met her match in Dominant mountain man Blake Walker.  Initially, he’s not too impressed with the new VIP guest at his family’s remote guest lodge.  But maybe she’s the baby girl this Daddy Dom’s been looking for.

This book, the second in the Dream Dominant Collection, is on my mind a lot these days.  I’m currently writing Dream Dominant Book 4, WARRIOR MINE, which is a spin-off of LOST & BOUND.

Still a stand-alone novel, WARRIOR MINE picks up the story of Blake’s sister Jackie, and her new love interest, Blake’s friend Scott.

But today, I want to give you a snippet from LOST & BOUND.

Curiosity got the better of Shasta as the black Lincoln pulled up to the red-painted clapboard lodge.  The trip down the unpaved drive from the highway had taken a good fifteen minutes.  A friend of a friend of someone Eddie knew had told him about the place.

Shasta had checked it out on her phone.  The website wasn’t kidding when they said ‘remote.’  The tree-shrouded driveway opened up onto a clearing to reveal the large main lodge and a sprinkling of small cabins, all painted the same warm red.  A sparkling lake was visible beyond the buildings and Shasta could see a small plane at the end of a long dock.

She climbed out of the back of the car and took a few steps to stretch her legs.  Still wearing the outfit she’d worn to court, she realized that stilettos were probably not the way to go on the soft ground.

Eddie looked at her across the top of the car.  “Well, kiddo, are you ready?”

She flipped her red hair in annoyance and followed him up the front steps and into the two-story building.

They were greeted by a petite brunette woman with a friendly face.  “Welcome!  We’re so glad to have you.  I’m Jackie Walker.  This place has been in my family for three generations.”

Shasta shrugged noncommittally.  Eddie filled in the gap.  “Thank you.  Shasta is understandably tired from the trip.  I can take care of checking her in.”

“Of course,” Jackie replied, watching Shasta curiously.  “Let’s get that squared away now.”

Shasta wandered over to a window and peeked out.  “If you think I’m staying in one of these little shacks, you’re crazy.”

“Oh, no, Ms. Pyke, we have you in the island cabin.  It’s very private,” Jackie assured her.

“Hmm, island cabin.  That sounds more like it.”  Digging into her huge black leather bag, she extracted her phone and stalked outside.  It wasn’t that she was anxious to talk to anyone.  She simply felt humiliated.  Her life had spun so far out of her control and she felt like an errant child.  She stabbed at the phone anyway, and she was irritated to find that there was no signal.

“Why can’t I get some fucking bars?” she muttered to herself, waving the device around as if she’d catch a signal if she hit just the right angle.

“You won’t find a signal.  There are no towers for about a hundred miles.”

Shasta turned and glared at the source of that information.  He was a good foot taller than she, with broad shoulders wrapped in some sort of flannel.  He had dark brown hair with caramel highlights that glinted in the sunlight filtering through the tall pine trees, and he’d pulled it back, presumably to keep it out of his eyes, which were the most sparkling blue.

Seeing her glare, he raised both hands in mock surrender and walked away, heading for the front door of the lodge.  The door opened just as he reached it.

“Oh, good, you’ve met Blake.  Blake will be taking you across to your cabin.”

Jackie chose to ignore her sarcasm.  “He’ll load your things into the boat and you can get settled.”

“Okay, kiddo, this is where I leave you.”  Eddie crossed to Shasta.

“Can I speak to you for a moment?” she asked him.  She took his arm and led him a few feet away.  “Please,” she begged, clutching his hand, “please don’t leave me here.  Don’t make me do this.”

Waves of desolation washed over Shasta and she felt hot tears threatening.  She pulled her sunglasses into place and cleared her throat.  “Okay, fine, whatever.”

Eddie flashed his winning smile.  “That’s my girl.  I’ll see you in a few weeks.”

Shasta fought panic, willing her breathing to return to normal as she watched the car carrying Eddie disappear down the drive.  She turned to see the woman watching her curiously.

“Blake probably has your things in the boat by now.  But you’re welcome to stay for supper before you go out to the island.  It’s not fancy, but it’s good.”  The woman smiled reassuringly.

Uncomfortable, Shasta crossed her arms in front of herself.  “No, thanks, I’ll just go to my place now.”

The woman nodded.  “If you just take that path, you’ll end up at the dock.”  She waved to her right.  “The kids and I leave for Orlando in the morning.  Blake will be here to help you with anything you might need.”

Wordlessly, Shasta nodded and headed off in the direction the woman had indicated.

Blake had heard the car pull up.  He dawdled, swiping at imaginary smudges on the passenger door of the de Havilland Beaver that rested at the end of the dock.  He had no desire to get caught up in whatever celebrity fanfare accompanied their new guest’s arrival.

The voices faded after everyone went inside and still Blake waited a few minutes longer before making his way back up the dock toward the front of the lodge.  He was surprised to see a young woman standing alone in the clearing in the center of the cabins.  Her back was to him and he took a moment to watch her.

His first impression was that she was sexy as hell.  Her shoulder-length hair was bright red, and expensive-looking sunglasses sat perched on top of her head.  She was wearing a white halter blouse with a very short black skirt.  Her high-heeled shoes were bright pink suede and they wobbled precariously as she marched around holding her mobile phone in front of her like a divining rod.

When he told her about the lack of signal, she whipped around, giving him a glare that would freeze lava.  Fine, lady, have it your way, he thought.

Thankfully, Jackie came out with a smarmy-looking older guy in an expensive Italian suit.  Blake busied himself retrieving a mountain of bags from the trunk of the black Lincoln.  He noticed that the guest of honor grabbed the suit’s arm and pulled him off to the side for a little chat.  He wondered if her tone was any friendlier with him, and he figured that it wasn’t.

He’d just finished loading all the bags into the front of the red aluminum skiff when Pink Shoes came tapping down the dock.  His gaze started at the shoes and slid up shapely legs to the tight skirt and curved hips.  The deep V in the halter top hinted at stellar tits and her lips were a deep red.  She wore too much makeup in his estimation, but there was no denying that Shasta Pyke was hot.

“Are you ready to head over to the island?”

He watched her grip her huge black leather shoulder bag, hiking it higher up on her bare shoulder.  “Um, yes, please.”

Blake wasn’t sure, but she seemed embarrassed by her earlier behavior.  He offered her his hand and she took it, gingerly stepping into the boat.  She sat on the center bench, facing forward, away from him, and clutching her bag like it was a life preserver. 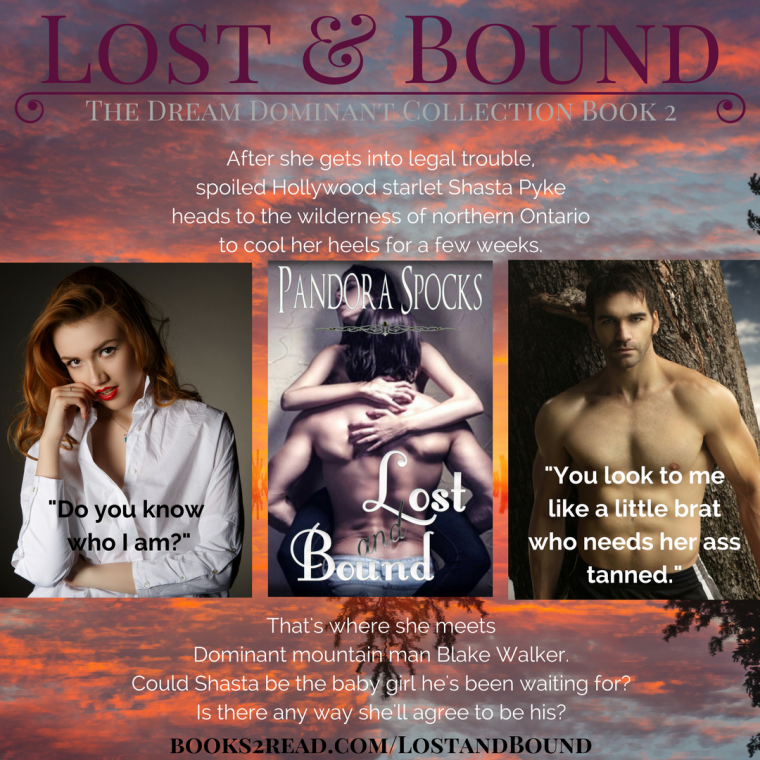 Stay tuned for news about the release of WARRIOR MINE.

In the meantime, you can find LOST & BOUND
at your favorite online bookseller.
books2read.com/LostandBound