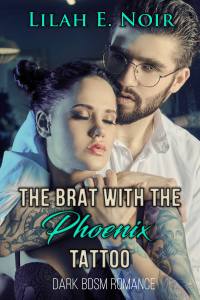 “Don’t say anything more, kitten.
I’ll take what I wanted to do back in that night.
I just didn’t have the tools to put you in your place.”

5 stars  Twisted Tale of Revenge
ByPandora Spockson September 24, 2016
Format: Kindle Edition|Verified Purchase
Paul is a man set on revenge. More specifically, he’s obsessed with the idea of doling out payback to Sage Phoenix, the girl who took his V-card back in high school and left him humiliated. When he happens to spy her working in her own tattoo shop, he sets his plan in motion. But there are unforeseen complications; nothing is ever that simple.

The Brat with the Phoenix Tattoo is the first book in a new series by Lilah E. Noir. It’s sexy as hell and completely intriguing–can’t wait for the next one! Highly recommended!

Here’s the official blurb:
Sage was the bad girl, the tease with short skirt and body made for sin.
Paul believed in logic and order until she turned the tables on him.
It’s a hot summer night in the city.
He’s no longer the boy she seduced in high school.
It’s time for payback and he has all the tools to make her break.
She’ll know what it’s like to be pushed too far.
Can he resist her? Who will win the ultimate battle of wills?

So guess what?  You can get your copy of
THE BRAT WITH THE PHOENIX TATTOO
for just 99¢ from April 24-30!