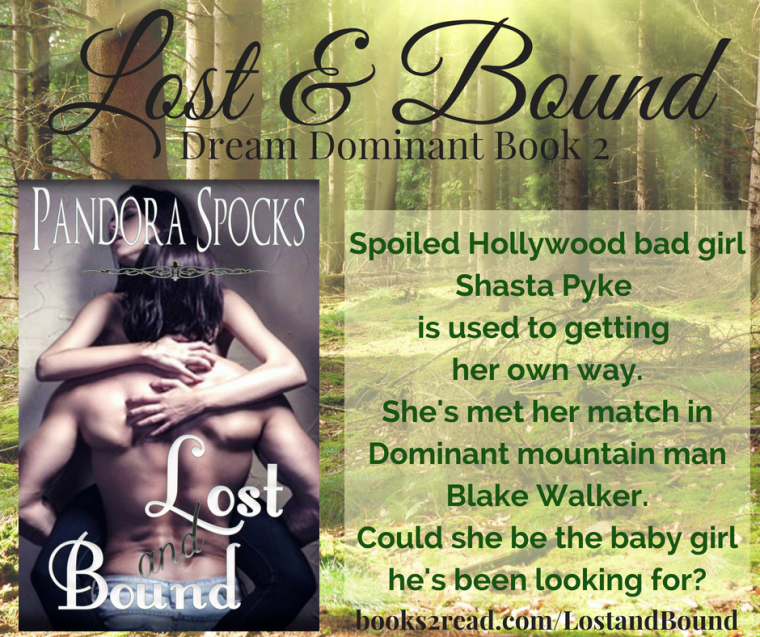 In LOST & BOUND, following a brush with the law, actress Shasta Pyke is sent to cool her heels for a few weeks in the wilderness of northern Ontario.  It’s there that she meets ruggedly handsome Blake Walker, an experienced bush pilot who helps run his family’s remote guest lodge on Lake Miranda.

Initially, Blake’s not too impressed with the lodge’s sole VIP guest.  But as he spends time with her, he begins to see the frightened little girl she hides from the world.  Could it be that Shasta Pyke is the baby girl this Daddy Dom has been looking for? 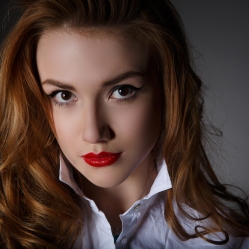 Here’s an excerpt from LOST & BOUND.

Blake had heard the car pull up.  He dawdled, swiping at imaginary smudges on the passenger door of the de Havilland Beaver that rested at the end of the dock.  He had no desire to get caught up in whatever celebrity fanfare accompanied their new guest’s arrival.

The voices faded after everyone went inside and still Blake waited a few minutes longer before making his way back up the dock toward the front of the lodge.  He was surprised to see a young woman standing alone in the clearing in the center of the cabins.  Her back was to him and he took a moment to watch her.

His first impression was that she was sexy as hell.  Her shoulder-length hair was bright red, and expensive-looking sunglasses sat perched on top of her head.  She was wearing a white halter blouse with a very short black skirt.  Her high-heeled shoes were bright pink suede and they wobbled precariously as she marched around holding her mobile phone in front of her like a divining rod.

When he told her about the lack of signal, she whipped around, giving him a glare that would freeze lava.  Fine, lady, have it your way, he thought.

Thankfully, Jackie came out with a smarmy-looking older guy in an expensive Italian suit.  Blake busied himself retrieving a mountain of bags from the trunk of the black Lincoln.  He noticed that the guest of honor grabbed the suit’s arm and pulled him off to the side for a little chat.  He wondered if her tone was any friendlier with him, and he figured that it wasn’t.

He’d just finished loading all the bags into the front of the red aluminum skiff when Pink Shoes came tapping down the dock.  His gaze started at the shoes and slid up shapely legs to the tight skirt and curved hips.  The deep V in the halter top hinted at stellar tits and her lips were a deep red.  She wore too much makeup in his estimation, but there was no denying that Shasta Pyke was hot.

“Are you ready to head over to the island?”

He watched her grip her huge black leather shoulder bag, hiking it higher up on her bare shoulder.  “Um, yes, please.”

Blake wasn’t sure, but she seemed embarrassed by her earlier behavior.  He offered her his hand and she took it, gingerly stepping into the boat.  She sat on the center bench, facing forward, away from him, and clutching her bag like it was a life preserver.

They didn’t speak during the ten-minute ride across the water to the small island in the middle of Lake Miranda.  It would have been difficult over the roar of the small outboard motor, even had she been facing him.

Blake expertly angled the small boat to rest beside the tiny dock and killed the motor, tying off his end before jumping out and tying the front end as well.  Then he again offered his hand, helping Shasta climb out of the boat and onto the dock.

She stood taking in the view as he unloaded her things.  The lodge was visible across the water, seemingly closer than it actually was, judging by the ten-minute ride.  If she hadn’t been in such a foul mood, she would have found the place beautiful.  The only sound she could hear was the wind in the tops of the countless pine trees covering the island.  It would be a short climb up to the crest of the island where a log cabin sat.  She could see a stone-surrounded fire pit flanked by a quartet of dark green wooden Adirondack chairs and further away, stretched between two large pines, was a white canvas hammock.

When all her things were on the dock, Blake turned to her.  “Let me take you to the cabin.  There are a few things I need to show you.”

He took off up the hill and Shasta teetered along behind him, carefully avoiding large rocks that were in the way.  “Are you making it?” he called over his shoulder.

“I’ve got this, don’t worry about me,” she muttered.

Blake turned away and grinned to himself.  He was waiting for her when she finally made it up the hill.  “I hope you brought other shoes.”

Out of breath, Shasta put her hands on her hips and nodded.

He unlocked the door and held it open for her to enter the cabin.  She stepped into an open room featuring a seating area in front of a fireplace immediately to her right.  Further into the room, a kitchen was arranged in the back left quarter of the space with a cast iron stove on the back wall and a kitchen table pushed against the right wall down from the fireplace.  Between the fireplace and the kitchen table was a small desk that held some sort of radio equipment.  Shasta peered into an alcove to her left and saw that it was a tiny bedroom.

“Now,” Blake was saying, “the lights run on propane.  You turn this little lever and you can light them with a lighter.  The fridge and the cooktop also run on propane.  Same thing, you turn the knob and then light it with the lighter.  I already lit the pilot on the fridge and it should be fine.”  He indicated a small metal box beneath the kitchen counter.

Wordlessly, Shasta followed him around the room, trying to take in all his instructions.  “Now if you want to bake, or if you’re just cold, you can build a fire in the stove.”  He showed her where to put the wood.  “And there’s always the fireplace.  Wood is stacked outside against the back of the cabin.  I can always bring you more, too.”

He waved at the few kitchen cabinets.  “We’ve stocked the cabinets and the refrigerator but if you need anything, just let me know.”  He headed for the door.  “Water comes from a spring near the front of the island.”

Desperately, Shasta searched the room, making a beeline to the sink.  Instead of a faucet, there was a green-painted old-fashioned hand pump.  She worked the handle a few times and a spurt of water came out.  She looked back to him, bewildered.

“Well, you can’t drink that.  Not without boiling it for about ten minutes.  It comes straight out of the lake.  Use it for dishes and things.  You can drink the spring water right out of the ground.”

“Wait a second.  Where’s the bathroom?”

Blake headed out the door and Shasta followed along behind him.  He turned down the right side of the cabin, following a narrow trail through the trees.  Shortly, the path opened onto a small clearing and to the right of the clearing was a tiny log structure.  “Here’s your bathroom,” he pointed.

“No.  Absolutely not.  This is completely unacceptable.  Besides,” she breathed deeply, trying to regain her composure, “where is the shower?”

“Well, some guests bathe in the lake.”  He took in her incredulous expression and continued.  “On the other hand, we do have a solar shower.  I’ll show you.”

Shasta followed him down the other side of the cabin, to the place where the tiny bedroom jutting out from the main cabin made a little sheltered corner.  A post was situated in the corner with a pulley rigged to the top.

“This is a solar shower.”  Blake held up a large flat rectangular vinyl pouch that was clear on one side and black on the other.  The clear side had a large round valve and there was a handle on one end.  The other end had clear tubing attached and at the end of the tubing was a tiny shower head.

“You fill this up with water, seal the valve, and lay it out in the sun.  The dock is a good place.”  He watched as Shasta held her forehead with the palm of one hand, gaping at him in disbelief.  “Anyway, when you’re ready for a shower, you hang it up here,” he indicated the pulley, “and just shower away.  The spruce trees right here make for privacy, although you shouldn’t have any folks out on the lake, seeing as how you’ve rented out the whole place.”

Wordlessly, Shasta turned and hobbled back to the front of the cabin, sinking into one of the Adirondack chairs.  Blake followed, hands in his pockets, uncertain whether or not to continue the tour.  She glanced up at him, deciding to change tacks.

“Listen,” she smoothed, “we seem to have gotten off on the wrong foot.”  She pasted on her dazzling Shasta Pyke smile.  “Obviously, there’s been some kind of mistake.”  Standing, she approached him, pushing her glasses back up onto her head and fixing him with soft brown eyes.

“Here’s the thing.”  She reached out to stroke his arm, biting her lower lip provocatively.  “I can’t stay here.  And you don’t want me here, not really.  The place is already paid for.  Just,” she stepped closer, brushing her breasts against his arm, “maybe you could drive me someplace where I can get a cab or an Uber or something, and I’ll be out of your hair.”  She wrinkled her nose and winked.  “What do you say?”

He waved over his head and didn’t turn around.

Wordlessly, he cast off from the dock and pushed the boat away from the shallow water.

“What about my bags?  They need to be taken to the cabin!”

“And it will be dark soon.  So you might want to get on that,” Blake chuckled.

Shasta was on the dock by now and she stomped her foot, fists balled at her sides.  “Do you know who I am?” she screamed.

“You look to me like a little brat who needs her ass tanned,” he fired back.

She shrieked unintelligibly and threw a rock at the boat.  She missed by a mile and the rock plonked harmlessly into the water.

Blake laughed again, started the engine, and headed back to the lodge.

LOST & BOUND is available at your favorite online bookseller:
books2read.com/LostandBound

I’m currently hard at work on WARRIOR MINE, Dream Dominant Book 4.  Although it’s a stand-alone novel, it’s a spin-off from LOST & BOUND.

I’m planning on a summer release.  Keep watching for the reveal of the gorgeous cover, designed by the ever-sexy and talented Linzi Basset.