Presenting the official book trailer for my new novel,
WARRIOR MINE!

Like all the books in the Dream Dominant Collection, it’s a stand-alone novel.  But it’s a spin-off from Dream Dominant Book 2, LOST & BOUND.  Characters and timelines intersect, but I made sure you can read this new book, even if you haven’t read the other one.

For WARRIOR MINE, I returned to the Canadian setting of LOST & BOUND.  It’s a place near and dear to my heart, a place where I spent many a happy summer vacation during my childhood.

From the mid-1940s, my family owned an island in the northern Ontario wilderness.  We had a tiny log cabin on a little island on a remote lake not far from the town of Elliot Lake.  When I took my kids, they were the 5th generation of my family to spend time there.

In LOST & BOUND, Hollywood bad girl Shasta Pyke stays in the cabin for a while.

Later, in WARRIOR MINE, Scott Nielsen remodels it into a bunkhouse for his outdoors school.

These are actual photos from the Spocks family album. 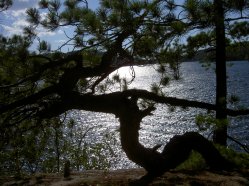 Because it’s so remote, we flew by bush plane over crystal-clear lakes to reach our island.

In LOST & BOUND, I had Blake Walker use a bush plane to ferry guests to remote cabins owned by Lake Miranda Lodge.

Again, these are Spocks family photos.

Ironically as I was writing LOST & BOUND, my parents sold the property.

Here’s a little teaser from WARRIOR MINE.

“What would you do with the lodge, if you could do anything you wanted?”  Amy looked at Jackie curiously.

Jackie gazed dreamily across the water.  “Well, I’d upgrade the whole place.”  She looked at Amy.  “Not modernize it, I wouldn’t want to lose the rustic charm, but…”  She sighed, thinking of the capital it would take to make the place everything she envisioned.  Amy watched her, waiting for her to speak.

“I would put in new beds, update the kitchenettes but use vintage-looking appliances, restore the rooms in the main house to use as guest rooms like they used to be, build a little house for the kids and me to live in…”  She smiled sheepishly.  “Not that I’ve put a lot of thought into it,” Jackie laughed.

Amy smiled.  “I think you have some great ideas.  This is such a special place.  I’d love to see you do really well.”

While she was speaking, Jackie became aware of the buzz of an airplane in the distance.  Normally, she’d assume it was Blake.  Her eyes darted beyond Grant and Emma, to where Blake’s De Havilland Beaver floated, moored to the end of the dock.  But Blake’s plane is here.

Now that they were quiet, the buzz seemed louder.  Both women looked in the direction of the noise.  The plane, a small pontoon plane quite like Blake’s, was coming closer and seemed to be descending toward the far south end of the lake.

“What the…” Jackie murmured.

Using their hands to shield their eyes from the glare of the afternoon sun, they rose from their chairs.  White spray fantailed behind the twin pontoons as the plane landed at the far end of Lake Miranda.  Even Grant and Emma lost interest in their fishing as the plane motored its way toward them.

“Maybe you’d better get in the house,” Jackie said to Amy.

“I’m not leaving you to deal with whatever this is.”

They made their way down the deck steps and across to the dock.  “Go inside, kids,” Jackie said.

“In the house.  Now.” Jackie marched purposefully down the dock, and Amy followed along behind her.  Torn, Jackie still debated sending Amy into the house with the children.  Unconsciously, she stepped between Amy and the intruder.

The plane was mere yards away from the dock by this time.  Squinting against the glare, Jackie could see the pilot, his face obscured by green aviator sunglasses and huge headphones.  He appeared to have a light blond beard and mustache.

As he got closer, he cut the engine, and the lake was quiet again.  The door popped open and the pilot swung himself down and grabbed a paddle from the inner side of one of the pontoons, using it to maneuver the aircraft toward the dock.

Headphones removed, Jackie saw that the man had long, thick honey-blond hair that hung in a braid down his back.  He gave a little salute as he got closer.  To Jackie’s relief, he didn’t seem to have a camera.  But her hackles were up anyway.

“No.”  Jackie shook her head firmly.  “You can’t be here.  Just go on back to wherever you came from, this is a private dock.”

“But,” the stranger began.

“Nope, no buts.  You’ll have to go now.”  Jackie planted her feet shoulder-width apart and crossed her arms.

“I talked to Blake a couple of weeks ago, told him I’d be stopping by.”  The stranger smiled reassuringly.  Up close, he was tall, well over six feet, and his forest green polo shirt clung to muscular shoulders and upper arms.  Short sleeves showed tats up both arms.  Khaki shorts revealed strong legs flecked with light hair, and on his feet, he wore battered brown leather boots.

He’d gotten the plane to within a few feet of the dock.  To tie up, a couple of the skiffs would need to be moved.

The man’s face lit up in a smile, and he nodded.  “I’m Scott Nielsen, I used to work with Blake.  You must be Amy?”

Hands back on her hips, Jackie moved in front of Amy again.  “Um, yes,” Amy frowned.  “Blake told you about me?”

Scott laughed.  “We’re pretty tight, Blake and me.  He’s like the little brother I never knew I wanted.”

He laughed again.  “And I guess that makes you Jackie.”  Holding the line to the plane, he stepped onto the dock, moved the sunglasses to the top of his head, and offered his hand.  “Scott Nielsen.  Sorry I just barged in on you like this.  I sort of thought Blake would be here.”

Slowly, Jackie reached for Scott’s hand.  “He’s in town, but he’ll be back soon.  I didn’t mean to be rude, it’s just that we’ve had a little bit of trouble recently…”  Her voice trailed off as she stared into his bright blue eyes.

Jackie shook her head sharply as though to clear the cobwebs.  “Oh, never mind.  Let’s get you tied off.  Can I offer you some iced tea?”

WARRIOR MINE, Dream Dominant Book 4, comes out August 14.
Reserve your copy for the pre-order special of 99¢.
books2read.com/WarriorMine