Happy December!
I’m in the mood for holiday stories, so this teaser is from WARRIOR MINE, Dream Dominant Book 4.

When Blake and Amy returned to Lake Miranda the week before Christmas, snow blanketed the compound.  After the lake froze solid, and Scott’s students either hiked to the island or were shuttled by snowmobile.

His last session before the holidays ended just before Blake and Amy came home, but the lodge had guests scheduled throughout Christmas and New Year’s.  Trina and the restaurant staff came up with a festive holiday menu, and Walker’s on the Lake was completely booked for both holidays.

When Jackie called her parents to ask about their holiday plans, she was surprised to find out that the elder Walkers had reservations for a Christmas cruise to the Caribbean.  “Your father just couldn’t stand the thought of all that snow,” Ann laughed.  “You all have a wonderful holiday!”

Blake and Amy agreed to spend Christmas at Jackie and Scott’s house, the better to enjoy the kids’ excitement on Christmas morning.  The day after they returned, Scott and Blake took Grant and Emma snowmobiling in the forest to find a proper Christmas tree to set up in the window of Scott and Jackie’s family room.

On Christmas Eve, after the kids had gone to bed, the adults gathered around the enormous festively-decorated white spruce.  Light Christmas jazz played in the background, and outside the floor to ceiling windows, snow swirled lazily in the half moonlight.

Jackie handed Amy a mug of warm mulled cider and settled beside her on a leather sofa with a mug of her own.  On the floor, Scott and Blake sat amid the scattered pieces of a pink Barbie house ‘Santa’ had found on sale months earlier and had put away until now.

Winking at Amy, Jackie suppressed a smile.  “Did you guys read the instructions?”

“We don’t need the damn instructions,” Blake huffed, pushing a stray lock of dark hair out of his eyes.  “We’re two intelligent, grown men.  We can figure out how to put together a dollhouse.”

The women clinked their mugs and giggled gleefully.

Amy looked from Blake and Scott to the twinkling Christmas tree, and to Jackie.  “I love this.”  Her voice was soft, and though she smiled, a tear was in her eye.  “This is the Christmas I always wanted.”

Blake pushed up from the floor and pressed a tender kiss to Amy’s temple.  “This is our life, kitten.  This is our family, your family.  You belong here.”

Jackie smiled across the room at Scott, who winked at her, and she felt a familiar tummy flutter.  She loved the man more than she’d thought humanly possible.  And when summer came, she’d marry him.

After Blake and Amy retired to the guest room, Scott and Jackie went to bed, quietly making love, then holding each other until late into the night.

They awoke to a bright sunny day, the sky crystal cerulean, the sun reflecting brilliantly off the sparkling snow.  Emma and Grant squealed excitedly as they saw the mountain of gifts under the tree.  Scott sat at the end of the sofa and Jackie snuggled up beside him, each of them sipping steaming mugs of coffee.  Blake and Amy sat opposite them on the sofa’s twin, smiling as they watched the children tearing into their gifts.

Once they were finished, the kids had fun delivering gifts to the adults.  Finally, all the gifts were opened.  Blake and Amy gave each other a conspiratorial look.  “We have a few more gifts,” Amy said.

“More?” Jackie echoed, thinking of the extravagant handbag for her, and the top of the line boots for Scott.  “You’ve done so much already, seriously.”

Blake reached behind the sofa and picked up four identical shirt boxes wrapped in metallic red paper.  He glanced at the tags and handed one to each of the children and to Jackie and Scott.

Amy leaned forward excitedly.  “You have to open them all together.  Ready?  One, two, three!”

With a bemused glance at Scott, Jackie carefully opened her box.  Grant and Emma ripped theirs open.  “It’s a shirt,” Emma said, holding up a pink t-shirt.

Grant peered into the box.  “Thanks, Aunt Amy,” he said, making an effort to sound enthused about a shirt.  “It sure is…pink.”

Jackie gasped.  “I knew it!  I knew you were pregnant!  I’m so excited for you!” she squealed, rushing over to give Amy and Blake a big hug.

“We didn’t want to tell anyone until we knew everything was going to be okay,” Amy explained.

“Cool,” Grant said, pulling his new shirt over his head, “we’re going to be cousins!”

“Aunt Amy, are you having a boy baby or a girl baby?” Emma asked.

Blake grinned.  “It’s a little girl.  That’s why we gave you pink shirts.”

Jackie sank onto the sofa beside Amy.  “A little girl,” she shook her head smiling.  “That’s fantastic.”

Amy nodded, eyes shining.  “Do you want to see the ultrasound pictures?”

“I’ll get them,” Blake said, heading in the direction of the guest room.

Grant and Emma returned to their new toys.  Scott perched on the arm of the sofa next to Jackie.  “I’m so happy for you two,” he told Amy.  She laughed happily.

From the direction of the guest room, they heard a tiny yip.  Jackie frowned.  “What was that?”

Eyes wide, Amy gave an exaggerated shrug.  “I have no idea.”

“Uh oh,” Blake called from the guest room.  “I think I found another present.”

Jackie looked up to see a shaggy black puppy with a huge red bow come running into the room.  He ran straight to the kids, yipping excitedly.

Grant squinted at the tag on the big red bow and gasped.  “Mom!  It’s for us, from Santa!”

Blake leaned against the doorway looking pleased with himself.

“I think Grandma and Grandpa might have mentioned it to the big guy,” Blake grinned.

Oh, for f—” Jackie glanced up at Scott.  “Did you know about this?”

He raised his hands in surrender.  “I promise, I knew nothing about a puppy.”

“They love Bear so much, they need one of their own,” Amy said, smiling.

“So, what are you going to name him?” Blake asked.

Brow furrowed, Grant watched the Newfie puppy for a moment.  “Max.  He looks like a Max to me.”

Jackie shook her head.  “He’s cute, I’ll give you that.  But I still want to see those ultrasound pictures of my niece.” 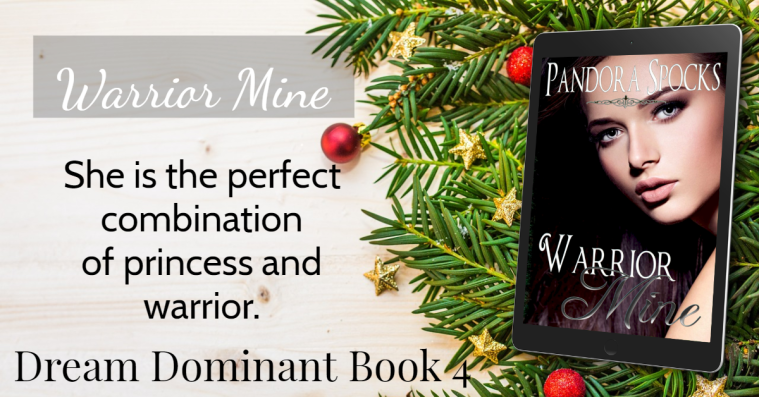 One-click WARRIOR MINE at Amazon.