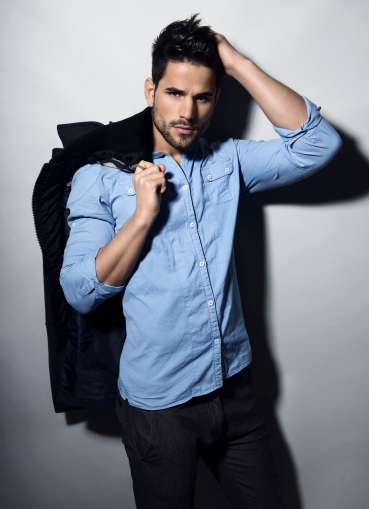 On Sunday, December 17, I’ll be taking over a Facebook event called Book Elves on the Shelves from 5pm-6pm EST.  In preparation for the event, I was called upon to write a character interview.

After some thought, I decided to interview Michael Rannigan from RANNIGAN’S REDEMPTION, and I have to confess, it was amazing getting back in his head.  Obviously, I love all my characters, but there’s something about Michael that sticks with me after all this time.  I thought I’d share the interview with you.

An Interview with Michael Rannigan:

Q: Tell us a little about yourself.

Michael Rannigan: Well, I’m a lawyer.  Earned my law degree at NYU here in Manhattan.  I’m a founding partner at Murphy, Rannigan, and Metheny, along with my buddies Brian Murphy and Jim Metheny.  Those guys and their associates practice a lot of different kinds of law.  Up on the 50th floor, we specialize in high profile defense.  When the rich and famous get into trouble, they call me.  *laughs*

Q: You’ve had an associate working with you for a number of years, Maggie Flynn.  Tell us about her.

MR: Maggie?  She’s a good addition to the team.  Smart, a hard worker.  Has an eye for detail, that’s for sure. She’s a great lawyer.

Q: There are those who say the two of you are close.  Are you romantically involved with Maggie?

MR: *blinks hard* No.  Next question.

Q: That question seemed to bother you.

MR: I date a very specific type of woman.  Even if I were to break my rule about going out with a colleague, which I wouldn’t, Maggie’s not my type.  I like blondes with big *waves hands in front of himself* egos and low expectations.  I’m not a ‘relationship’ kind of guy.  *gazes at hands*  Maggie deserves better than that.  *looks up suddenly*  That was off the record.

Q: Of course.  What are your plans for Christmas?

MR: *confident smile returns* I’m jetting off to Barbados that afternoon.  But I’ll probably pop by Maggie’s place that morning, say Merry Christmas to everyone gathered for her annual Orphans and Misfits Christmas celebration.

Q: Thank you for talking with me today.

Rannigan’s Redemption, my three-novel spicy vanilla law drama, is the story of the complicated relationship between bad boy Manhattan attorney Michael Rannigan and Maggie Flynn, the smart redhead he hires to join his prestigious firm.

Michael is a rogue, an inveterate player with a stable of surgically-enhanced bottle-blondes at his beck and call.  Maggie’s smart and capable, maybe even a better lawyer than Michael, if he stops to think about it.  She’s too smart for his sexual tastes, definitely not his type.  So why can’t he get her out of his mind?

Maggie has been in love with him from the beginning.  She knows how he operates, and that the situation is all but hopeless.  But she sees the man he could be.  For now, she’s content to work with him.

What would happen if they crossed that line? 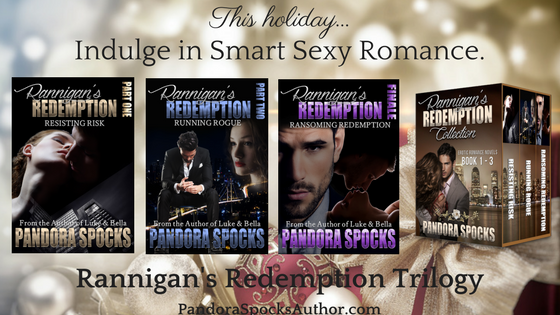 The three Rannigan’s Redemption books, RESISTING RISK, RUNNING ROGUE, and RANSOMING REDEMPTION are available individually, or as one boxed set.  Full disclosure, the first book ends in something of a cliffie, so…

And please join me Sunday at Book Elves on the Shelves.  It should be lots of fun! 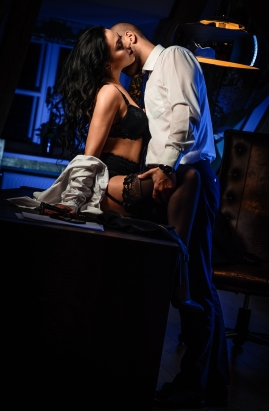 What is it that makes for a great romance story?  Interesting plot lines, right?  Sexy settings.  Hot love scenes.  All true.  But for me, I have to care about the characters if I’m going to get into a story.  I need to feel their emotions, to relate to their motivations.  And while we are sometimes invited into their thoughts, it’s really the words of characters that tell us about them.

So how do you write great characters?  Make them relatable, believable?  They have to have great dialogue.  I think the thing you have to do is to listen to people.  A lot.  Listen to conversations around you, listen to characters in movies and on television.  I’d bet that every character you write has his or her origin in someone you know.  Delve into the motivations of that person to give your characters believable reasons for what they do, what they say, and how they are.

I rehearse conversations between my characters before I ever write them.  I run lines while I’m in the shower.  I hold entire conversations while I’m driving through town.  I can only hope that other drivers think I’m singing along to the radio.

I always try to make sure that a character’s words are authentic to his or her personality.  Sometimes, characters have potty mouths.  You don’t plan it, it just turns out that way.  Maggie Flynn, from Rannigan’s Redemption, is like that.  And although it’s not the way I talk, day in and day out, I couldn’t shy away from it just because it’s not me.  It’s Maggie.  Backing off of that rings inauthentic.

Here’s an example from Book 1 of Rannigan’s Redemption, Resisting Risk:

It was noon when Maggie exited the elevator on the 50th floor.  She’d dressed in a purple turtleneck and charcoal slacks, a scarf with a purple paisley design accenting her neck.  Karen wasn’t at her desk.  Probably at lunch, Maggie thought, and she went directly to her office.

Opening the door, she started to toss her bag on the desk when she realized someone was sitting there.  Her arm stopped mid-swing, her eyes wide, and she looked back at the door, frowning.  “May I help you?” she asked.

The guy was about her age with brown hair and eyes.  He looked startled.  “Um, no, thanks.  I’m okay for now.”

Maggie raised an eyebrow.  “You’re in my office.”

“Oh, you must be Maggie,” he said.  “Mr. Rannigan said you wouldn’t be in until tomorrow.”

“And yet, here I stand today,” Maggie replied in an irritated tone.  She turned and marched down the hall to Michael’s office.  At his closed door she hesitated.  He might be with a client, she considered.  Fuck that!  Some dude is in my office.

She threw open the door with enough force to swing all the way open and it crashed into the wall behind it.

Michael, seated at his desk and concentrating on his computer, jumped.

“What the fuck, Michael?!” Maggie demanded.

“And it’s nice to see you, too, Mags,” he replied with a grin.  “Welcome back.  We didn’t expect to see you until tomorrow.”  He met her at the door and ushered her into the reception area.

Michael put up both hands in defense.  “Calm down, Mags, everything’s okay.”

Maggie shook her finger in his face.  “Don’t you tell me to motherfucking calm down!  If you were going to fire me…”

Michael continued to guide her down the hall.  “That’s Josh, we just brought him up from downstairs,” he explained calmly.

“I don’t care where he came from, he can just take his skinny little ass right back…”

“Because as far as I know I still have a contract…”

“You can’t just push me out, I’ve worked way too hard…”

“Mary Margaret!  Stop talking,” Michael interrupted.  They’d stopped in front of the door to what used to be John Hemphill’s office.  He pushed it open.  “This is your new office.”

Maggie stopped mid-sentence.  She was looking into the most beautiful room she’d ever seen.  It was a confection of lavender and cream and eggplant.  On the far side of the room next to the floor to ceiling windows, there was a silver chandelier over a small ecru French desk.  On the desk was a white and purple orchid in a shallow lavender bowl.  Purple drapes and cream sheers framed the wall of glass.  Nearer the door there was a seating area with a cream sofa accented with lavender and purple pillows fronted by a glass coffee table.  On the other side of the room was a small glass conference table and four purple upholstered chairs.  The new pale hardwood floor was arranged in a herringbone pattern.

“It looks like an office in Paris,” Maggie breathed.  She crossed the room to examine a pair of large framed photographs.  Gasping, she looked back at Michael.

He smiled at her.  “Florence,” he said.  “This is why I wanted you to wait until tomorrow.  The furniture was delivered this morning.  We literally just got it finished.”

Maggie’s eyes were wide.  “I don’t understand,” she said.

“Let’s go to lunch.  We’ll talk about everything,” Michael said.

Great characters are believable.  You can relate to them because you understand their feelings and motivations.  And you gain that insight from meaningful, authentic conversations.

But you can get it FREE when you subscribe to my Newsletter.