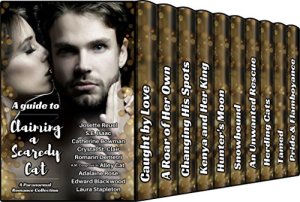 Ten stories to melt your Kindle!

Last weekend at the Tampa Indie Author Book Convention, I met paranormal romance author Josette Reuel, who told me about an anthology you should know about.  If you’re into shifters and hot romance, this is the collection for you, but what really impressed me is that 25% of eBook sales goes to the Wounded Warrior Project, and that’s something I can really get behind.

Here’s the lowdown on the anthology:

A collection of ten never before published paranormal romance tales about strong females who struggle to hold on to their scaredy “cat” males. This anthology is full of steamy hijinks that might just melt your eReader.

Follow these lynx, panthers, jaguars, lions, tigers, witches, cu-sith, and familiars as they find love when they’re least expecting it.

Included in this collection:

Caught by Love by Josette Reuel
Distracted by a bad mane day and haywire magic, Laith forgot to hide from love.

A Roar of Her Own by S.E. Isaac
No place to hide, when she’s on the prowl to find love.

Changing His Spots by Catherine Bowman
She captures his unwilling heart with her spirit and her camera.

Hunter’s Moon by Romarin Demetri
Autumn should never have let him go.

Kenya and Her King by Crystal St. Clair
A king only bows down to his queen.

Snowbound by A.M. Cosgrove
He likes the quiet of the woods. She’s looking for some peace of her own. Will they be able to survive the storm that is threatening their solitude?

An Unwanted Rescue by Adalaine Rose
An unwanted rescue breeds an unwanted love.

Herding Cats by Edward Blackwood
Some cats just leave mice on the doorstep, he brought her a whole clowder of trouble.

Tamed by Laura Stapleton
Only the queen of hearts can tame this king of the beasts.

One-click
A Guide to Claiming a Scaredy Cat
at Amazon today! 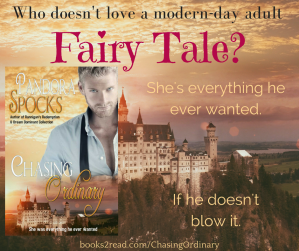 I’m away from home today, posting from the Tampa Indie Author Book Convention.  It’s been a great event so far, and we have another fantastic day to go.

While there has been a lot of interest in the Rannigan’s Redemption trilogy and the Dream Dominant Collection, people have been going crazy over modern-day adult fairy tale, CHASING ORDINARY.

Artist and rancher Petey Cavanaugh has no idea that the handsome businessman she met one rainy Manhattan night is actually Europe’s most eligible prince.
Nik is fascinated by the pretty red-haired sculptor, the only woman he’s ever met who sees him as simply a man rather than an institution.  He realizes he needs to tell her the truth, but for now, he’s relishing his first-ever taste of ordinary.
But sooner or later, she’s going to find out.  Will he lose everything he’s ever wanted?

Here’s a snippet from CHASING ORDINARY.

Petey stared into the dressing room mirror.  “Oh, my God, I look like Alice Cooper on a three-day bender!”

“And we’re getting a picture of it, too,” Colin said, snapping a photo with his phone before she could protest.  “Because this is going to be a hell of a ‘before and after.’”

Colin clapped his hands loudly.  “Okay, people, we have an extreme makeover.  STAT.  Let’s see…”  He circled Petey, brow knit in concentration.  “First, we ditch this horrid dress.  Honey, I don’t know what you were thinking.”

“Unh, this was my friend Jules’ idea,” Petey snapped back.

“Well, what did you do to make her hate you, because this thing is a nightmare.  Arms up,” he directed.

“This from a guy in orange pants,” Petey snarked, as she raised her arms.  Two female assistants gripped the hem of the dress and pulled it over her head.

“These are harvest rust, and they’re Prada.”

“Dude, they’re orange.”  Uncomfortably, she clutched her arms in front of herself in a vain attempt to cover her panties and bra.

Colin barked with laughter.  “I like you.  You’re feisty.”  He continued to peruse her closely.  “And you have great tits.”

He reached to cup one of her breasts and she batted his hand away.  “Hey!  Watch it!”

He just rolled his eyes.  “Honey, please!  Tits are not my thing, except the way they fill out couture.” 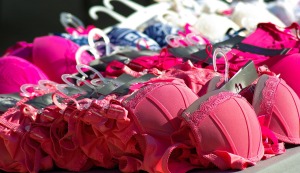 To one of the assistants, he snapped, “Elaine, go to the stash of Agent Provocateur and find something in a, what?  34D?”  Petey nodded mutely.

“And Zoe?  I’m seeing her in that pink Solace London.  The one with the mock turtleneck?”  The two women hurried off, presumably to find what they’d been sent to get.

Colin turned back to Petey.  “Get out of your wet undies and slip on a robe.  We’ll get you cleaned up, and then we’ll polish you until you sparkle.  Don’t worry about a thing.”  He winked at her and sent her on her way.

For the next twenty minutes, an entire team worked to put Petey back together.  Her hair was washed and her face was cleaned.  While someone worked on her makeup, another person gave her a pedicure, while a third did her nails.  Finally, her hair was blown out.

Colin returned to inspect their handiwork.  Nodding approvingly, he smiled at Petey.  “Okay red, in the dressing room, you’ll find new lingerie, a dress, and a pair of shoes.  Get dressed and come on out.”

Petey stepped into the dressing room and closed the door.  The mirror was covered with paper, and she’d only seen a maddeningly brief glimpse of herself in the makeup chair.  A plush chair held a cardboard box lined with tissue paper.  Inside were a pretty bra and panty set.  A pink dress hung on a hook on the wall, and she saw a shoe box on the floor.

Lifting the bra from the box, she admired the sheer burgundy fabric, embroidered with peach and deep pink flowers.  The tag still hanging from the garment announced its price–$215.  Petey gaped.  The matching panties turned out to be a thong, priced at $130.

Her most extravagant lingerie purchases had been a few bras from the Victoria’s Secret semi-annual sale.  It had taken over an hour to find something she liked, and she’d had a sneaking suspicion they’d made a stack of ugly bras just so they could discount them.

Shaking off her reservations, she dressed quickly, careful to pull the dress over her head without looking at the tag.  It seemed better not to know.

The shoebox held a pretty pair of mauve velvet ankle-strap stilettos.  She sank onto the chair and fastened them on her feet.  God, what I wouldn’t give for a mirror right now.

Glancing at her watch, she saw that it was exactly twenty-five minutes since he’d left her to go upstairs.  He.  She had no idea of his name.  In all the chaos, she hadn’t thought to ask.

When she opened the dressing room door, a crowd was waiting, with Colin smack in the middle.  There was a collective gasp as he snapped a photo.  The group burst into applause, and Colin took a bow.  “That, ladies and ladies, is why they call me the ‘miracle worker’.

Petey carefully climbed the three steps to the top, and stopped short.  Gazing back at her was the most beautiful self ever to greet her from a mirror.  Her long red hair was blown out silky and smooth, her makeup, including false eyelashes, expertly applied.  The pastel pink dress fit her like it was made for her, the mock turtle collar hugging her neck, leaving her shoulders and arms bare.  The clingy knit hugged her curves, and the hem hit just below her knees.  The color complimented her hair and skin flawlessly.

Colin stepped up behind her.  “Naturally, the dress is meant to be shorter.  But because you’re such a shorty, it hangs longer on you.  If we had the time, I’d have it taken up.”

Petey turned to him, eyes shining.  “Thank you so much.  I can’t possibly afford these things.  I’ll take them to the one-hour cleaner first thing tomorrow and return them.”

The man gave a friendly chuckle.  “Don’t worry about it, sweetie.”

“Hello?  Is she ready?” a male voice called.

Petey turned around.  Her rescuer had returned.  For the first time, she noticed his British accent.  Their eyes met and she gasped lightly.  He was the most gorgeous man she’d ever seen.  His dark blond hair was neatly trimmed, a thin scruff of beard defining the contours of his chiseled square jaw.  Deep blue eyes gazed back at her, wide with apparent surprise.

Certainly, she’d looked different when last he’d seen her.  As had he, to be honest.  He was now dry, his hair neatly back in place.  While the suit he’d worn earlier had been blue, the current one was a deep charcoal.

They stared across the room for what felt like an eternity.  Finally, she broke the ice.  “Hi.”

Petey looked to Colin, then back at him.  “Yes, I think so.”

“Before I send you back out into the monsoon, I’m putting a coat on you.  No more getting drenched.”  An assistant appeared with a trench coat in a black and white chevron pattern.  Colin helped her into it.

She threw her arms around him.  “Thank you!  Thank you for everything.”

She headed to the doorway where he waited.  He called across to Colin.  “Thank you.  You’re a lifesaver.”

Colin laughed and waved.  As the pair left, he shook his head.

CHASING ORDINARY is available at your favorite online bookseller.
And it’s at Table #26 at the Tampa Indie Author Book Convention.

I’m getting excited about this weekend’s Second Annual Tampa Indie Author Book Convention!  I was at last year’s inaugural event and this year promises to be even better, with more attending authors and a great new venue.  Le Meridien, formerly a courthouse, is on the National Register of Historic Places.  Check it out.

The signing event is Saturday and Sunday, July 14 and 15.

As a gift for signing up for my newsletter, I’ll be giving away digital copies of my naughty little summer novella JUST ONE NIGHT.  Plus, I’ll have swag galore, including some fun goodies from Kink Crate.

If you’ll be anywhere near the Tampa area this weekend, be sure to stop by! 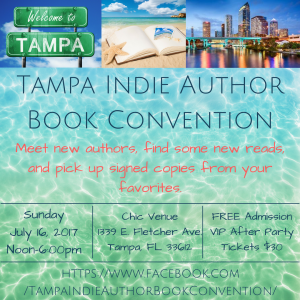 Looking for your next great read?  Love to have fun in the sun?  Join me this Sunday, July 16, in Tampa for the Tampa Indie Author Book Convention!

I understand that about 40 Indie authors will be there, chatting with readers and signing books.  I’ll have copies of RESISTING RISK, LUKE & BELLA, and LOST & BOUND.  I’ll also have some free swag.

Admission to the event is FREE, and you can buy tickets to the VIP after party where there will be food and an OPEN BAR.  Just imagine, sipping cocktails and chatting with your favorite Indie authors.  Sounds amazing, right?

Check out the official Facebook page of the Tampa Indie Author Book Convention.  And if you’re going to be anywhere close, please stop by and say hello! 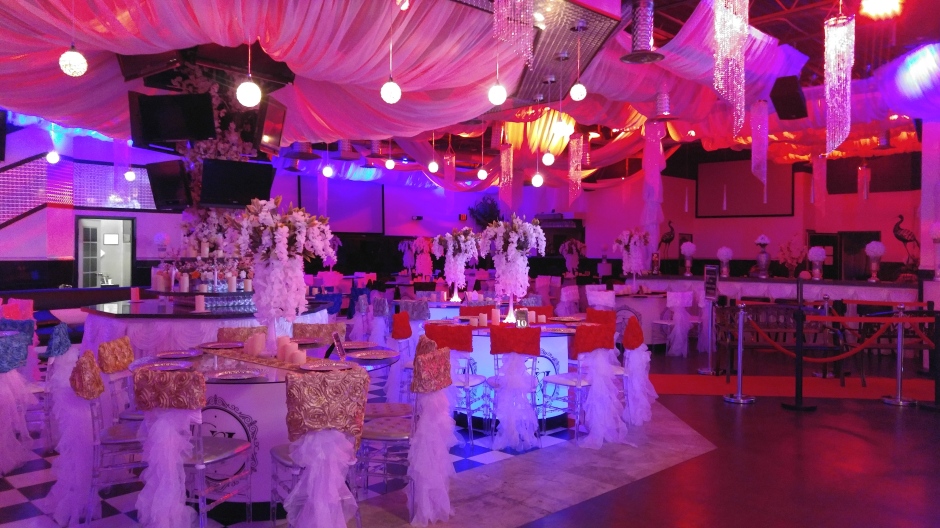 Join me, and a host of other Indie Authors, at the Tampa Indie Author Book Convention this July! I’ll be there signing paperback copies of some of my books, designed exclusively for this event. See you there!

It’s almost time for the convention, and we are super excited to have all of you with us. We have updated the attendee list, and expect many more to sign up. Today, we started advertising to local book clubs, event forums, and even local new and radio stations. Soon, everyone in Tampa will have heard of this event.

If you want a tour of the venue, check out this video. It’s going to be amazing!