Rumor has it, if she bangs the bouncer, he’ll let her in…. 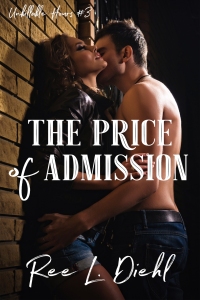 Dax Masters is the star of Save a Horse, Crop a Cowgirl, where country meets kink.  The buff Texan Daddy Dom is in town to promote his new fitness DVD.  Tonight, he’ll be the guest DJ at the hottest nightclub in the city.

Dax is out of the kink closet, and if Jace isn’t, his secrets are nothing to the ones that Tiffany is keeping.  Yes, they’ve signed a nondisclosure agreement, but can she trust him with the truth of who she really is?

Welcome to the Unbillable Hours Series, where the best things happen off the clock.

How about a steamy little excerpt?

Jace took her hand and towed her after him, not stopping until they were behind the building, away from prying eyes.

“Much better,” he said.  Raising her wrists, he pinned them to the wall on either side of her head.

“You like to be the center of attention,” he murmured, keeping his voice low and intimate.

“I’ve got eyes,” he rumbled.  “I see you better than you think I do.  You dressed down tonight, little girl.  The jacket’s fine.  The top is nice, but those denim shorts and hooker heels scream slut.  That’s not the kind of look that normally gets you into Club Oasis.  That’s what a woman wears when she’s looking to get laid.”

He pressed his body against hers and let her feel just how ready he was to oblige.

Tiffany resisted the urge to hump the lump shaping the front of his jeans.  “Seems to me, you’re the one looking to get laid.  I planned to have a drink, dance with my girl, and go home to my lonely bed.”

“Jace,” he growled.  “And I wasn’t looking for a hookup until you came.”

She slid her gaze to the gold band on his left middle finger.  “You moved your ring quick enough once you saw me.”

He crooked an unapologetic grin.  “A wedding ring keeps most of the she-wolves at bay.  There’s nothing to be jealous of, sugar.”

Wasn’t there?  Dozens of women lined up for him every night at Club Oasis.  How many others had he dragged behind the building?  How many of them had he screwed before her?

It wouldn’t hurt him to be a little jealous, too.

“My shorts don’t say slut,” she informed him.  “I wore them for your guest D.J.  You do know who he is, right?  Dax Masters from Save a Horse, Crop a Cowgirl, where country meets kink?  Most of his submissives wear them.  Outside his dungeon, that is.”

He pulled his head back and stared at her, frowning slightly as he tried to figure her out.  “So…,” he said slowly, “you’re telling me that you like Dax’s show?  You like watching kink…?”

Did he know so little about her?

“I don’t just watch kink,” she said meaningfully.  Telling him was risky.  She could have scared him off.  When he didn’t run, she dared even more.  “Ask me nice, and I’ll share my favorite scenes from the show.  Who knows?  You might learn something.  It never hurts to expand your repertoire, Jace.  You don’t want things to get stale in a relationship.  It’s not good to be too predictable.  Women like being surprised.”

“News flash.”  Quick as an adder, he fisted her hair and pulled down, forcing her neck to arch.  Bending his dark head, he opened his mouth, bit the curve of her shoulder, and dragged his teeth up the side of her neck to whisper in her ear.  “Men do, too.”