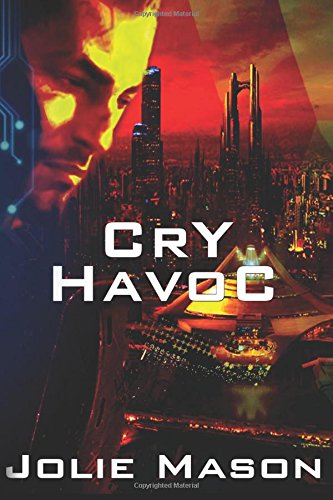 I’m so excited, and if you love sci-fi with plenty of action, heart, and romance, you’ll be excited, too.

Jolie Mason has a brand new release called Cry Havoc.  And one reason I’m thrilled is that she’s brought back the Lancers, who I thought we’d seen the last of after the finale of the Redemption series.  I was never happier to be wrong.

So what is Cry Havoc about?  Here’s the blurb:

Aiden Simeon hasn’t had a normal life. That’s how he became a tech with a mercenary group on Havoc Station, one of the roughest places in the galaxy. He’s inherited the responsibility of three other kids, while he’s still just a kid himself. The Lancers are the only ticket out of the system, and he intends they’ll be on that transport when they go.

Provided, of course, he can solve the problem of a cyber attack on the station, survive the war with a new and overwhelming enemy, and learn how to fit in an evolving world where nothing can stay the same.

I’ve already started reading it.  Be assured, when I finish it, I’ll publish a full review, but I’ve got to tell you, I’m so loving this book!

How about a sneak peek?

Station’s klaxon sounded all through the security room. “What was that?” Luca asked him tensely.

He accessed the station’s interface. The holo image that was Havoc stood before him dressed in simple white and looking visibly upset, which was damned unnerving.

“Aiden Simeon. There is no way to stop them,” the AI stated.

“There is a private security detail from the Halcyon in dock at CT335. They are firing into the crowd on the concourse.”

He stared at the interface’s all too human reaction. “Shut it down. Override.”

“I cannot, Aiden Simeon. They are not responding to outside protocols.”

He nodded. “That’s the only option. Havoc, alert the 47th. Don’t send your own drones. Leave them inactive. The last thing we need is a war on the concourse.”

He and Luca headed for the open area of the concourse where they could hear the commotion of energy weapons discharging and people running and screaming. Aiden and Luca hugged the walls until they could see the unit of security droids ahead firing on anyone human. He heard Luca’s quickly drawn breath.

“Oh, my gods. Those are security droids? They look like mechs.”

They were big, no question there. Aiden looked around and tapped Luca on the shoulder. There was a security station to their right. “How’s that clearance? Still higher than mine?”

She followed his gaze and nodded.

“Let’s go shopping first then. What do you say?”

He smiled for the first time in what felt like forever as they stayed low and tried to stay invisible among the mass of running lifeforms trapped in the concourse. Making their way quickly through the security office, Luca headed straight for the armory vault, entered a code, and pulled the long cabinet out with a clang.

Aiden didn’t wait even a second. He grabbed one of the more powerful rifles in the back and checked the charge. He threw the strap over his shoulder, grabbing for two extra charge packs and stuffing them in his vest pockets. He grabbed two stunners, handing one to Luca.

She stared at it dubiously, until he said, “Aim it at their control panel, lower left side.”

She nodded and stuck the stunner in the back of her pants. “Okay, got what you want?”

At his nod, she slammed the cabinet shut and they headed back out into the fray. They stayed low taking in the mess that was the concourse.

The droids had already killed dozens, crashed a transport in the hub, and destroyed two restaurants and a storefront. Shards and twisted metal littered the floor. They each took cover behind a hulking drone maintenance station.

Two of the machines occupied the now empty space before them, shining in the glinting station lights and alert for any movement.

They stood taller than any security drones he’d ever seen before. The most disturbing part of the pair was that they appeared to be communicating, at one in purpose, and working together. Mech networking was supposed to be for sharing battle data and enemy position, not for making behavioral decisions.

Aiden peeked out again to see one droid appear to relay an order to the other with a hand gesture. He waved to catch Luca’s eye.

Then, Aiden gestured to the other side of the concourse where there was limited cover. He let Luca know he was heading for that small area of cover, to try and get into a flanking position. She shook her head vigorously.

He had to admit, it was a long way. Holding his rifle in both hands, he gestured the gun toward the two droids, telling her without words that it was her job to fire on the mechs and let him get there. She rolled her eyes at him.

Aiden felt his heart pounding as he pointed the rifle up and took a deep breath. He nodded one time before running from the cover of the bulky metal structure, hearing Luca’s flurry of fire behind him. He slid into cover feeling a sting run up his left leg. He didn’t acknowledge the pain, but instead lifted the rifle to fire on the two machines. He’d chosen this rifle for a reason.

The package concealed a kick.

It had a snub nosed design that deceived. It looked like a much weaker weapon, but anyone who knew weapons knew this one would cut through four feet of bulkhead. He fired taking the closest droids head off, while the other one mistakenly focused on Luca who wasn’t holding the gun that was the greatest threat. Aiden hit the charge again, checking to see how many more shots before reload.

He was a good shot. The rifle could fire on this pack twice more. It would be enough. He lifted it carefully, blocking out the sight of Luca doing her best to keep out of the metal beast’s line of fire. He breathed in deeply then pulled the trigger. A moment after, the massive droid collapsed as his right leg was blown from beneath him. He crumpled to the deck, a useless hulk of metal.

Luca emerged from her hiding place to stand over the fallen giant and fire her pulse into its hardly human-like face. It stopped moving entirely. Aiden moved out of cover to stare at the thing, lying on its side. For a mech, it was very fluid in design, but clearly machine, not meant to mimic a human at all.

Aiden nodded. “I’ve been patched in. The MI teams are moving on them now. There are two more. The Halcyon is reporting heavy casualties. There are more on board that are attempting to take over the ship’s internal systems. Once the station’s secure, the Lancers are planning to retake the Halcyon.”

“They have to.” Luca touched her comm. “Two Zero Comm, this is the XO. Train weapons on the Halcyon. If she undocks, pursue and destroy. And, please, try not to blow up the station in the process.”

She smiled at whatever was said on the encrypted comm. “I appreciate it, old man.”

Heart-pounding sci-fi action, characters you love, romance…  What more could you ask for?  How about the link to buy Cry Havoc?  Done!  http://amzn.to/2jdKn9d

Jolie Mason lives, works and plays on the mighty Mississippi in the infamous New Madrid, Missouri. Coming home again has allowed her time to write and chase the dream she’s always harbored in her heart, making people smile with future fairytales.

Jolie has been a fangirl to almost every scifi franchise out in her lifetime, and follows every possible scifi romance author out there. Nothing has ever captured her attention like scifi, and she’s put all that day dreaming to good use.

She began publishing Home in the Stars in 2015, and has since added a novella series called the 47th Lancers to that number. Jolie is currently working on two brand new scifi romance series, including the Brother Assassins.

Jolie Mason can be found here: